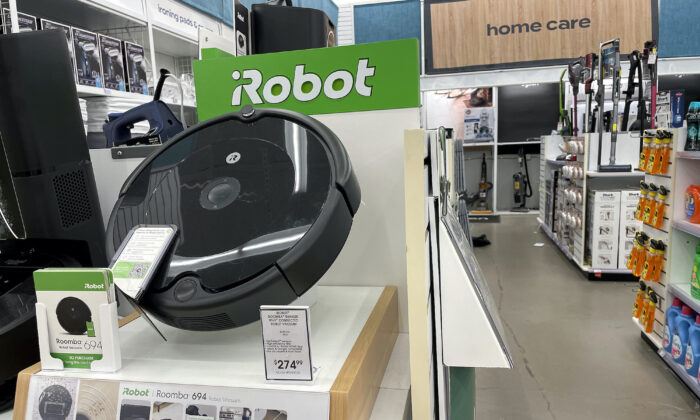 Roomba robot vacuums made by iRobot are displayed on a shelf at a Bed Bath and Beyond store in Larkspur, Calif., on Aug. 5, 2022. (Justin Sullivan/Getty Images)
Companies

Amazon has entered into a definitive merger to acquire iRobot, the creator of Roomba robot vacuums, in an all-cash transaction valued at $1.7 billion, the companies announced Friday.

“We know that saving time matters, and chores take precious time that can be better spent doing something that customers love,” said Dave Limp, SVP of Amazon Devices, in a statement.

Amazon did not outline its plans for the company instead focusing on the two companies’ shared values of innovation and inventiveness.

Since iRobot first unveiled its Roomba robot vacuum 20 years ago the company has sold 30 million robots worldwide. The company says that it builds products to help customers make their homes “easier to maintain and healthier places to live.”

Roomba robot vacuums are known for innovative technology that allows the robot to map the inside of a home using vSLAM® (Vision Simultaneous Localization and Mapping) technology, which allows the robots to navigate around objects while it cleans.

“Over many years, the iRobot team has proven its ability to reinvent how people clean with products that are incredibly practical and inventive—from cleaning when and where customers want while avoiding common obstacles in the home, to automatically emptying the collection bin,” Limp added.

The company cited unanticipated order reductions, delays, and cancellations from retailers in North America, Europe, the Middle East, and Africa, as well as lower-than-anticipated direct-to-consumer sales.

The Amazon merger may benefit iRobot which now sits in a competitive marketplace, with other robot vacuum brands including Neato, Roborock, Shark, and Wyze.

Colin Angle, who co-founded iRobot, will remain CEO after the merger is completed pending customary shareholder and regulatory approvals.

“Since we started iRobot, our team has been on a mission to create innovative, practical products that make customers’ lives easier, leading to inventions like the Roomba and iRobot OS,” Angle said in a statement.

“Amazon shares our passion for building thoughtful innovations that empower people to do more at home, and I cannot think of a better place for our team to continue our mission. I’m hugely excited to be a part of Amazon and to see what we can build together for customers in the years ahead.”

In 1990, MIT roboticists founded iRobot and the following year launched a robot designed for space exploration. Since then the company has been awarded a DARPA contract and used its technology in searches at the World Trade Center after 9/11 and the Great Pyramid in Egypt.

Antitrust experts are keeping an eye on how the U.S. Federal Trade Commission (FTC) will react to the merger as Amazon faces antitrust scrutiny in Washington, Bloomberg reported.

FTC Chair Lina Khan has been critical of Amazon’s market dominance and is already going to review the company’s purchase of One Medical’s parent company in a $3.49 billion deal last month.

Amazon has previously sought to have Khan recused from antitrust investigations of the company based on her prior statements.

At least one antitrust expert has noted that Amazon has its own home robot, Astro, which is not a vacuum. The expert suggested Amazon could be attempting to dominate the market by acquiring iRobot, which currently has 75 percent market share for robot vacuums, according to industry database Statista.

“Buying what is your biggest competitor should be an antitrust violation,” Sarah Miller, the head of anti-monopoly advocacy group American Economic Liberties Project, told Bloomberg.

The outlet also reported that lawyer Amanda Lewis said that the deal could also have anticompetitive effects.

Lewis, who led the Amazon section of a 2020 congressional investigation into online market competition, said the acquisition puts “Amazon in a position to disadvantage rivals on the platform and block access to important tools to reach new customers, like buying ads on Amazon.com.”

Litigation consulting firm Econ One Managing Director Hal Singer, who has been an expert in antitrust cases, told Bloomberg he would like to see the FTC try to challenge the merger but thought they’d have a hard time winning, citing “evidentiary burden.”

Amazon declined to comment on antitrust concerns and told The Epoch Times that the company would “continue to supply other retailers and vendors with iRobot products, and continue to sell other products on Amazon.com.”

This article was updated to include Amazon’s comments.