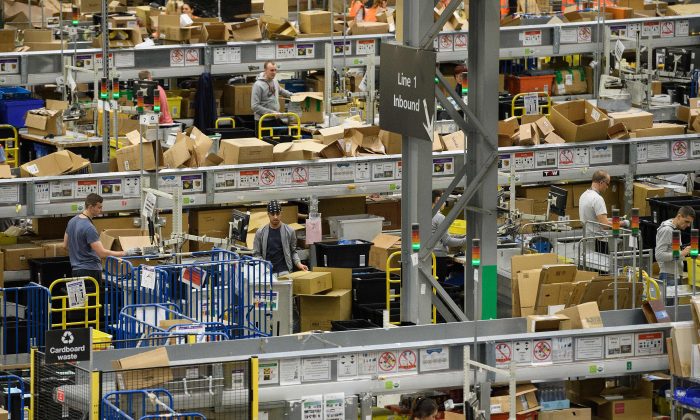 Amazon staff are “asleep on their feet” and suffering mentally and physically as they try to meet targets, a newspaper investigation has found.

Staff at the company’s newest warehouse in Essex have been pictured exhausted in the investigation for the Sunday Mirror.

They have to process up to 300 items an hour to meet demand, the newspaper alleged. Staff are so tired they cover clocks so they don’t know how long there is left on their shifts.

They also have to walk up to a third of a mile to use the toilet, which was photographed looking “disgusting”, according to the investigation.

An undercover reporter spent five weeks in the Amazon fulfilment centre in Tilbury, Essex, about 25 miles east of London. He said that workers were so tired from their 55-hour weeks that they would “sleep on their feet”.

He quoted one Amazon worker as saying: “At my induction, someone was asking why the staff turnover was so high. It’s because they’re killing people. All my friends think I’m dead. I’m exhausted.”

The warehouse has no natural light, so staff do not know whether it is day or night. The reporter worked from 7:30 a.m. to 6 p.m. with two 30-minute breaks.

According to the Daily Mail, an Amazon statement said: “Amazon provides a safe and positive workplace with competitive pay and benefits. We are proud to have created thousands of roles in our UK fulfilment centres. As with most companies, we expect a certain level of performance.

“Targets are based on previous performance achieved by our workers. Associates are evaluated over a long period of time.”

The Mirror reporter wrote: “Sometimes I met my targets, but I knew I couldn’t keep it up much longer.”

“By halfway through the day I felt drained. If I grumbled I was reminded my numbers would suffer if I stopped. In my final fortnight there were at least two safety incidents that could have seen somebody seriously hurt.”

One staff member told the reporter: “Everybody suffers here. I pulled my hamstring but I just had to carry on. My friend spent two days off after she damaged her knee ligaments.”

One worker is said to have collapsed while they worked and was taken to hospital.

Separately, it was found that ambulances were sent to Amazon’s main Scottish warehouse 43 times in 2016, according to the Daily Mail. Fifteen of the call-outs were in the most serious Category A classification.

Amazon said that in comparison to other warehouses, the injury rate was relatively low.

A spokesperson told the Sunday Post: “We have 41 per cent fewer injuries than other companies conducting warehousing activities in the UK, based on the latest available HSE RIDDOR reporting data.”

They added: “The number of times this has occurred is small when compared to the hundreds of thousands of days worked in our fulfilment centres each year by more than 5,000 people at our busiest times, and the figures have declined in the past year.”