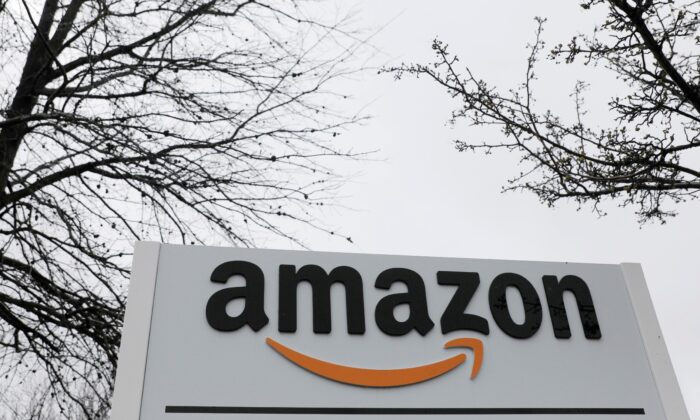 Signage is seen at an Amazon facility in Bethpage on Long Island, N.Y., on Mar 17, 2020. (Andrew Kelly/Reuters)
Tech

Amazon said on Monday that it was removing some QAnon products that violate the company’s policies from its online marketplace.

A spokesperson told The Epoch Times it will block the sale of several products in the coming days related to the conspiracy movement, which promotes a number of theories about a military operation to expose the “deep state” and its globalist agendas through cryptic messages. Establishment media and other critics have repeatedly characterized the theories as baseless conspiracies.

The company justified its decision by citing policies prohibiting offensive and controversial materials, and objectionable content in books.

The e-commerce company owned by Jeff Bezos drew scrutiny for continuing to allow QAnon merchandise to be sold on its platforms after competitor eBay said last Friday that such products were no longer permitted on its website.

The companies are facing pressure to drop the products following civil unrest and acts of violence that marred otherwise peaceful protests at the U.S. Capitol on Jan. 6.

A group of rioters and some protesters waving American and Trump flags illegally stormed the Capitol building as lawmakers were counting electoral votes in a joint session of Congress. Clashes in the area on the day left five people dead and dozens of police officers injured.

Photographs of the riots show self-described QAnon followers among the group that breached the Capitol building.

Amazon will also take action against sellers who attempt to evade their system and continue to list these products, including removing their selling priveleges, the spokesperson told The Epoch Times.

This comes on the same day as Twitter announced that it had removed more than 70,000 accounts promoting QAnon content since Friday.

“These accounts were engaged in sharing harmful QAnon-associated content at scale and were primarily dedicated to the propagation of this conspiracy theory across the service,” the social media platform said.

Meanwhile, Facebook announced on Monday that it is removing all content that contains the phrase “Stop the Steal” ahead of President-elect Joe Biden’s Inauguration Day on Jan. 20.

These decisions come as big tech companies ramped up efforts to police content that they claim could lead to potential harm offline. The targeted moderation by these Silicon Valley and other companies have raised concerns over First Amendment rights and the lack of checks and balances on decisions made by unregulated corporate giants.

Discussions over limiting or eliminating liability protections under Section 230 of the 1996 Communications Decency Act for tech companies that have engaged in censoring or political conduct have been heavily discussed in the past year.

Amazon has also suspended its web hosting service to social media network Parler. Parler, which had attracted a large following of classical liberal and conservative-leaning users, has since filed a lawsuit against Amazon in an effort to reverse the company’s decision.