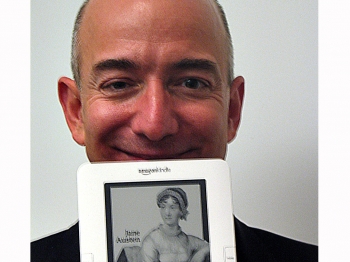 The Kindle is a wireless reading device, which allows users to read books electronically and without setting foot into a bookstore. Currently, the Kindle is only sold in the United States.

Amazon’s Kindle 2 International was introduced on Oct. 7 and is available in over 100 countries. The international version makes use of AT&T’s U.S. mobile network, while the older U.S. Kindle used the Sprint network.

“At home or abroad in over 100 countries, you can think of a book and download it wirelessly in less than 60 seconds,” Jeff Bezos, Amazon.com founder and CEO, said in a recent Amazon press statement.

Kindle offers 350,000 English language books with 75,000 added since June. Besides books, the device allows users to read more than 50 international newspapers, including the Financial Times and the Wall Street Journal, and 35 magazines, such as The New England Journal of Medicine, PC Magazine, and the New Yorker.

In its quest to capture the global market, Kindle already ran into a problem with German wireless carriers, including T-Mobile and Vodafone, according to the paidContent.org Web site. According to reports, a possible reason could be that the foreign wireless carriers asked for a price that did not sit well with Amazon. Another reason could be that Deutsche Telekom AG, the parent of T-Mobile, is preparing to roll out a device with similar functions in the near future.

At the end of October, Amazon officially launched its Kindle device in India as part of its global expansion plans at a cost of $279. Amazon is offering more than 280,000 books, periodicals, and magazines to Indian customers. The price per book could be as low as $5.99 and a few will be without charge.

Amazon even set up a customer discussion forum for Indian consumers to ask questions, resolve issues, or voice discontent. The forum was also open to possible and existing Kindle customers from Mexico, Hong Kong, Singapore, the United States, and other countries.

One forum user explained that Amazon products “arrived beautifully packed and totally intact,” while another was a little concerned about the high cost of shipping ($29) and Indian custom duties, claiming that in total, they amount to about 24 percent of Kindle’s price (around $67).

“It [the Kindle launch in India] certainly hasn’t started a fire. Before last month’s India launch of the Kindle, the e-book reader from Amazon, local media gave it top billing. It didn’t evoke as much attention as the iPhone when that came to the country in August 2008,” Knowledge @ Wharton (KW), publishing arm of the University of Pennsylvania, said in a recent report.

The media wrote favorably about the product, but tore apart the prohibitive cost, discouraging ordinary Indian consumers to even dream about buying the Kindle, including its high cost, shipping, and price per book.

On another sour note, some consumers immediately discovered that Amazon could pull a book with the blink of an eye, when a copyright or other issue arises, even if the reader had paid for it.

The Thinkdigit technical Web site, in an article about the launch of the Kindle, came up with a thought that Amazon should think about: “Currently it’s only an English language device. Amazon’s vision is to make available ‘every book, in every language, ever printed, anywhere in the world.’ But ‘til it happens, a large regional audience would be missed out on.”

“There is no plan to advertise the Kindle,” Laura Porco, director of Kindle Books U.S. said in the KW article. Qualifying her statement, she continued, “We will rely on word-of-mouth publicity.”

The Indian market is undoubtedly not a “big priority” for Amazon, suggested Kartik Hosanagar, a Wharton professor of operations and information management.

The KW professors agree with Amazon’s strategy for entering that market. It is important to put a foot in the door before any competitor shows up, and at the same time, test the waters.

A costly item is difficult to market in India, a traditionally price-sensitive market. Yet, lowering the price in India would open another Pandora’s box. Pricing the Kindle lower than in the U.S. market is not an option and would be the worst strategy, as this would open a gray market or unofficial distribution channel, which in itself is not illegal, but creates a pricing nightmare. The cheaper model would come back to the United States, and customers would demand that Amazon lower the price.

“Amazon is well aware that its market penetration in India will be low in the launch stages but it is still playing its cards right,” according to the KW article.