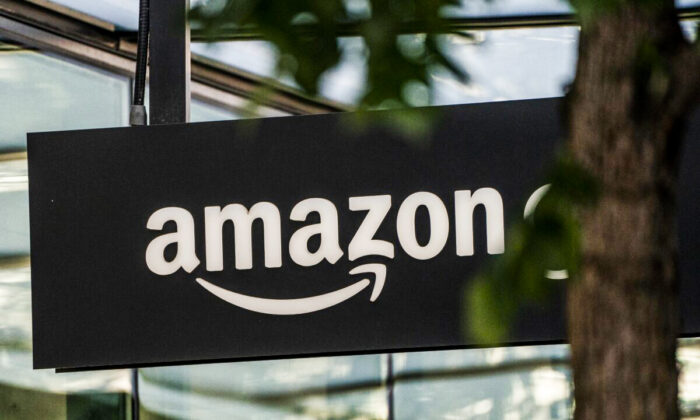 A sign is seen outside of an Amazon store at the company's headquarters in Seattle, in a file photograph. (David Ryder/Getty Images)
Media & Big Tech

Amazon agrees to pay a $2.25 million settlement and shut down its “Sold By Amazon” (SBA) sales program nationwide based on an investigation by the attorney general of Washington that found the company allegedly violated antitrust laws and engaged in price fixing.

Attorney General (AG) Bob Ferguson announced on Wednesday that his office has filed a lawsuit (pdf) and a legally binding resolution (pdf) against the e-commerce behemoth in the King County Superior court. “As part of the legally enforceable consent decree, Amazon must stop the ‘Sold by Amazon’ program nationwide and provide the Attorney General’s Office with annual updates on its compliance with antitrust laws,” according to the news release.

The currently-suspended SBA program, which ran from 2018 through 2020, was used by Amazon to undercut third-party sellers and unreasonably restrain competition to ensure maximum profitability just for the company based on findings by the AG’s office.

It worked like this: Amazon would invite a third-party seller onto its platform and settle on a minimum price for its products. If the platform manages to sell the product above the stipulated price, the companies would split the profits.

But Amazon’s dynamic pricing system would artificially raise prices for all similar products from different sellers. It prevented them from offering discounts and led buyers to swerve towards Amazon’s branded offerings where the company had the freedom to price as it chose. These actions constituted anti-competitive behavior and violated state laws.

Amazon is not simply a platform, but a provider of products, making them a competitor in the market. When competition gets together and makes deals regarding the prices of products, it falls within the category of price-fixing.

“Consumers lose when corporate giants like Amazon fix prices to increase their profits,” Ferguson said in the news release. “Today’s action promotes product innovation and consumer choice, and makes the market more competitive for sellers in Washington state and across the country.”

The $2.25 million settlement will be used to support the attorney general’s office regarding antitrust litigation.

The Seattle-based e-commerce giant maintained that they had shut down the program for reasons unrelated to the AG’s investigation. But, according to the AG, the SBA program was suspended within months of the office taking up the investigation. Nevertheless, Amazon did not fight the lawsuit and agreed not to restart the program.

“This was a small program to provide another tool to help sellers offer lower prices, much like similar programs common among other retailers, that has since been discontinued. While we strongly believe the program was legal, we’re glad to have this matter resolved,” said an Amazon spokesperson in an emailed statement to The Epoch Times.

Amazon “makes no admission of liability or any wrongdoing,” according to the settlement. As for the AG’s claim on enabling higher prices, the company said in the email that “the AG is wrong.”

“This was a program where Amazon was the retailer and purchased products from suppliers after receiving a customer order, as many retailers do; it was designed to and did enable Amazon to provide low prices for customers,” said Glenn Kuper from Amazon. “We continue to strongly believe the program was legal and good for consumers. The program was discontinued in 2020 for business reasons unrelated to the AG’s investigation.”

This is not the first time Amazon has faced charges related to anti-competitive conduct. In November 2020, the European Union filed an antitrust lawsuit against the company for collecting data from third-party sellers for determining what to launch and for how much.

In January last year, Amazon was taken to court for allegedly colluding with publishers to drive up prices for ebooks. Four months later, District of Columbia Attorney General Karl Racine filed a lawsuit for fixing its online retail prices and preventing sellers from offering discounts on other platforms or their own websites.