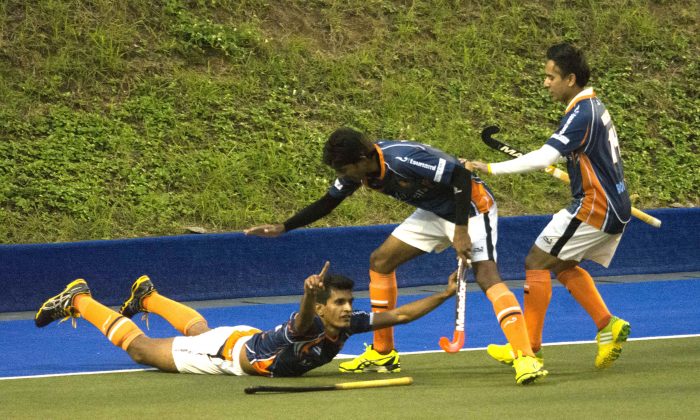 Clincher: Khalsa-A’s Arshad Mohammad nails the winner for his side and celebrates with a sky dive in their top of the table clash with Singh Sabha Sports Club (SSSC-A) in the HKHA Premier Division match at King’s Park on Sunday Dec 6, 2015. (Eddie So)
HK Hockey

Field Hockey
By Eddie So

Mohammad is no stranger to scoring this type of goal, having done so, on four or five occasions this season claimed Khalsa player/coach Arif Ali, whose initial penalty corner was instrumental in Mohammad’s sinking of their rivals and keeping Khalsa top of the division entering the holiday break undefeated while SSSC remain five points adrift in second place.

With the game looking likely to end in a 4-4 stalemate after SSSC-A stormed back from a 1-4 half-time trail, their captain Imran Muhammad half-time pep talk was all they seem to need as they wiggled their way back into the game said Khalsa skipper Dev Dillon.

“Arif had given us a game plan and in the first half we kept to that and it seem to work for us but we knew they would come back at us and we told ourselves (at the break) not to panic but I have to give these (SSSC) guys great credit as they brought the game back to 4-4 and the momentum was with them,” Dillon said.

He praised his side too as they kept their spirits up despite their rival’s resurgence as Khalsa pressed on to deny SSSC any leeway in the game.

“We kept going forward and we were able to grab the three points, three very important points,” said Dev, who admitted he was slightly dumbfounded by the way SSSC came back despite Khalsa pressure leading 4-1 at the break.

“From 4-1 up (and with SCCC pushing) but that’s hockey and the beauty of it and coming back from three goals down is not unheard of at this level,” Dillon said, who was further inspired by the day’s performance as the quality of the game showed it was on the rise in Hong Kong.

“I’m sure everyone (the fans) enjoyed the game and the fans were the real winners and it can only be good for Hong Kong hockey today,” Dillon added.

SSSC-A skipper Muhammad agreed with his counterpart’s assessment, saying he was not disappointed with the defeat and in-fact was further encouraged as the game was played at the highest level, himself a former international.

“Both sides have foreign players and they have two ex-Malaysian internationals and we have our share of former internationals so I can say the game was played at the highest caliber. We should have won today but that’s not the end of the world and we have more matches to play and we will come back with a stronger determination to do well,” Muhammad said, especially as the HKHA have adopted a three-round system with the top six teams playing off for the Premier league title.

The match started with both sides playing cautiously using a tactical approach looking for holes in each other’s almost impregnable amour while trying to avoid being carded.

After entering the break 4-1 down, SSSC-A were recharged and raring to go upon resumption of play much to the mortification of Khalsa-A who were riding on a wave of euphoria.

“I told my players to start playing simple hockey much like Khalsa and we have two good penalty corner convertors and then we started cutting down the gap,” said Muhammad, while praising his goalkeeper Gurdeep Singh whom he felt let in a soft fourth goal but regardless had a good game.

“Gurdeep did a fantastic job in blocking (palming) off the initial shot but it deflected to the pusher and well that’s hockey and we all make mistakes,” said Muhammad.

It all began in the dying minute of the match when Khalsa were awarded a penalty corner with Mohammad pushing the ball to Ali launching a powerdrive of a shot high but with Singh up to the task as he parried Ali’s shot only to reach Mohammad and the rest is history as Khalsa players hugged their player as he celebrated with a sky-diver on the pitch.

Ironically, Mohammad had opened the scoring for Khalsa with the first goal of the game followed by Ali netting two penalties in between.

Third place Hong Kong Football Club-A kept in touch with the top two sides with their 7-1 victory over Khalsa Naujawan Sahba-A, despite SSSC-A’s defeat there were no changes at the Premiership standings with Khala still on top with SSSC-A and HKFC-A holding onto their respective positions in second and third respectively.