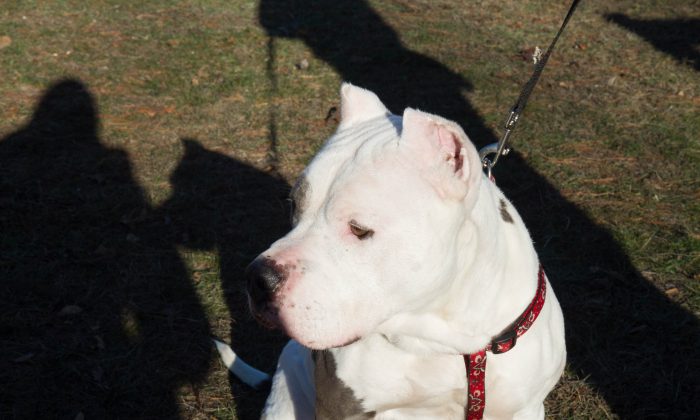 A stock photo of a pit bull. (Holly Kellum/Epoch Times)
US News

‘Amazing Dog’ Abandoned in Connecticut, Owner Reveals the Reason Why

An unknown dog owner in Norwalk, Connecticut, abandoned a dog and left a note, saying the animal is “amazing.”

“To whomever loves dogs: She’s an amazing dog,” the person wrote.

The ex-owner said the dog, named Annabell, is “house-trained” and will be 3 in August. The dog is “friendly” and has all its “shots.”

Then, the note revealed why the owner abandoned the dog, a pit bull.

The Norwalk Animal Shelter posted the dog and the note on Facebook on July 28.

“Pit bull female 3+ years old wearing a black collar no tags or microchip. Tied to a tree with a note attached to her collar @ Cranbury park on 7/26/19 For more information please call Norwalk Animal Shelter @ 203-854-3240,” the post reads.

“I wish we could find the owner. I’d buy dog food and treats until things were financially better,” one person commented.

Another added: “I wish her owner could have found a way to keep her, sounds like she really cared for this pup.”

“Cranbury Park has a dog park, so she wasn’t abandoning Annabelle somewhere no one would find her. While it’s something I couldn’t do, this dog was given love and care until it became impossible for the owner. Giving her up must have been painful. Times are so difficult for some, and people don’t sometimes realize the extreme expense of a pet. Judging is easy, understanding is hard,” a third continued.

But some said that the owner should have brought the dog to a shelter.

“Should have brought her to the shelter instead of tree in the park,” said one person.

A volunteer at a North Carolina shelter said she thought a rescued pit bull was “crying” in a now-viral video.

“I was waiting for them [the shelter workers] to health check a couple of the dogs we were considering pulling, and I was walking up and down the kennels, and I just saw this pit bull sitting there, and she was very humanlike — slumped over and very solemn,” Sarah Sleime told The Dodo. “So I bent over and started talking to her.”

She said that the 7-year-old dog had a litter of puppies, but her puppies were taken away.

“It was the craziest phenomenon,” Sleime said of the dog’s alleged tears.

Sleime said that workers thought she was confined.

The dog was then used “as a breeding machine,” she added. “She’s obviously had many, many litters.”

In a 13-year analysis, the website says that of 433 fatal dog attacks in the United States, pit bulls contributed to 66 percent, or 284 deaths