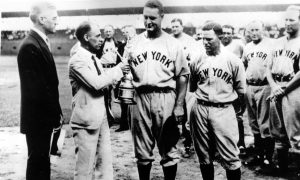 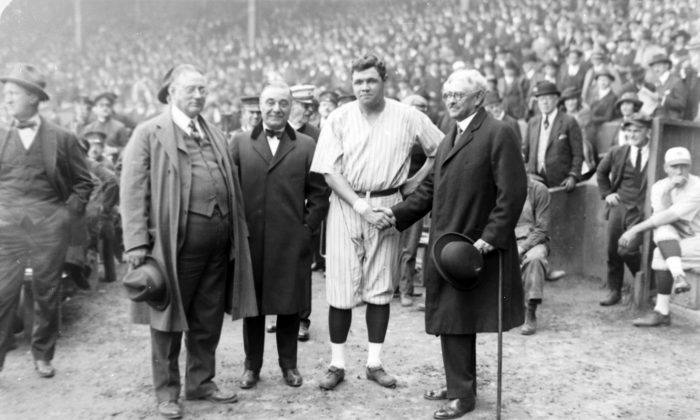 With spring training just around the corner, with so many of you writing that you were eagerly awaiting Yankee Quiz 5, without further ado—your wish is my pleasure. And look out for my newest:

59. What Yankee was nick-named “Bulldog”?

60. The tradition of honoring legends at Yankee Stadium started on Memorial Day of 1932. Who was the first monument for?

61. How many games did Babe Ruth win as pitcher for the Yankees?

63. For seven consecutive years a New York Mayor threw out the first pitch for the home opener of the Yankees. Who was he?

64. What number did Earl Combs wear and why?

65. What year did the Yankees begin playing Frank Sinatra’s “New York, New York” at the Stadium?

66. Joe DiMaggio, Mickey Mantle, Bernie Williams each spent more than a decade playing centerfield for the Yankees. Who spent the most time?

A. DiMaggio B. Mantle C. Williams D. Another player

67. What year did the first All Star Game take place at Yankee Stadium?

68. Who was the first black player on the Yankees?

69. Who said: I may not have been the greatest Yankee to put on the uniform, but I am the proudest.

70. Who wrote “New York, New York” the song sung by Frank Sinatra at the Stadium?

A. Billy Joel B. Kander and Ebb C. George Gershwin D. None of these

59. A. Jim Bouton because of his overbearing nature

64. A. 1 because he batted first in a Yankee lineup that began the practice of wearing numbers.

Dr. Harvey Frommer, a professor at Dartmouth College, is in his 40th year of writing books. The author of hundreds of articles and  43 sports books including the classics: best-selling New York City Baseball, 1947-1957 and best-selling “Shoeless Joe and Ragtime Baseball ,the prolific Frommer also authored the acclaimed Remembering Yankee Stadium (second edition 2016) and best-selling Remembering Fenway Park..He is at work on “the Ultimate Yankee book” to be published in 2017.