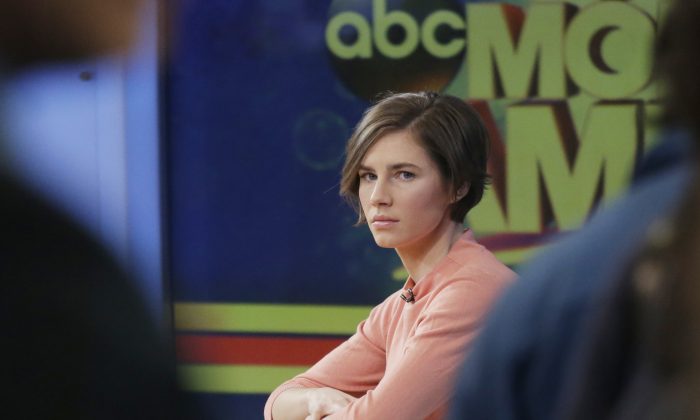 Amanda Knox waits on a television set for an interview, Friday, Jan. 31, 2014 , in a stock photo (AP Photo/Mark Lennihan)
Europe

Amanda Knox was allegedly captured via a security camera and is said to have proven her alibi wrong, reports have said.

An investigative TV show in Italy challenged her alibi, posting a surveillance video showing a woman who resembles Knox.

The video shows the woman walking through a parking plot near the home that she shared with Kercher.

The video footage was purportedly recorded on the night of Kercher’s death.

Knox previously said that she spent the evening at the home of Sollecito, according to The Independent.

The newspaper, citing investigative show Quarto Grado, reported that the jeans and long coat the woman was wearing in the footage is similar to what Knox was wearing after Kercher was killed.

“If the prosecution shows someone like Amanda Knox walking away from the crime scene it’s not helpful,” expert Barbie Latza Nadeau told the Independent. “For the defense, if there is a video of her anywhere near the house it’s not helpful to them because her alibi is that she was at Raffaele’s house.”

Knox, a few weeks ago, was convicted by a court in Italy of murdering ex-roommate Meredith Kercher in 2007 while she was studying abroad in the country. Knox currently lives in Seattle and has no plans on going back to Italy, she has said previously.

Her ex-boyfriend, Raffaele Sollecito, was also convicted of killing Kercher, a U.K. exchange student. Reuters reported in April that they killed Kercher over an argument rather than over a game.

Both Knox and Sollecito have said they’re innocent.

“The recent motivation document does not — and cannot — change the fact that the forensic evidence still does not support my participation and the circumstantial evidence still remains unreliable and contrary to the conclusion of guilt,” Knox said in a statement.