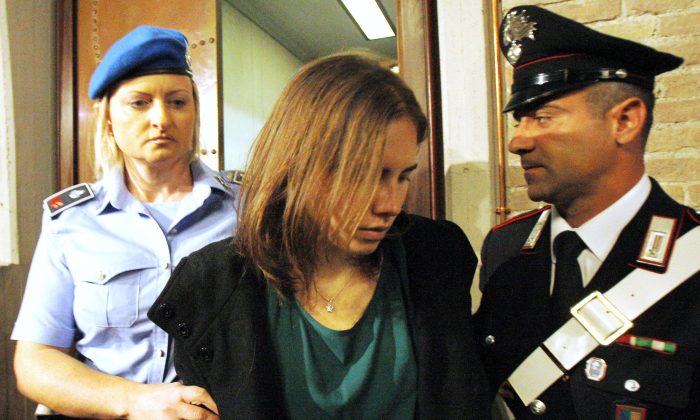 Amanda Knox in a 2011 file photo enters an Italian appeals court in what turned out to be a successful appeal of her guilty sentence. However, another court is currently re-examining the case. (AP Photo/Antonio Calanni)
Crime and Incidents

An Italian court will decide whether to reinstate a hefty guilty sentence for Amanda Knox later this week, in one of the more high-profile criminal cases around the world in the last several years.

Knox is accused of collaborating with co-defendant Raffaele Sollecito to kill Meredith Kercher, a 21-year-old Leeds University student in 2007.

Convictions were handed down against both in 2009, but lengthy appeals processes have continued to this day.

Now, this week, on January 30, it will be decided whether to reinstate the guilty sentences against the American and the Italian.

The case has turned complex as Sollecito’s defense lawyer argued that his client was the victim of deeply flawed prosecution and should walk free, reported The Guardian.

And Knox–currently in the United States–has said that she would not return to Italy if she is found guilty.

If the court finds either or both of them guilty, then the Italian supreme court would have to validate the ruling.

If that happens, then Italy could request Knox’s extradition from the United States. But the U.S. could refuse, on grounds in part because in the U.S., people cannot be tried for a crime of which they have been acquitted.

Knox told Italian media that she wishes to speak with Kercher’s family but feels that she would not be welcome to.

“I still want to talk with them, tell them directly that I had nothing to do with Meredith’s death, that I cared about her and that we were friends,” she was quoted as saying. “But I know that they see me as their daughter’s murderer [and] are convinced that it was me who killed her, and so it is still not the moment to speak with them. But that day will come.”

Rudy Guede, a man from the Ivory Coast, is serving a 16-year-sentence for Kercher’s murder, but the Italian supreme court said that the Florence court, which is currently handling the appeal for Knox and Sollecito, should re-examine whether Guede acted alone or not.