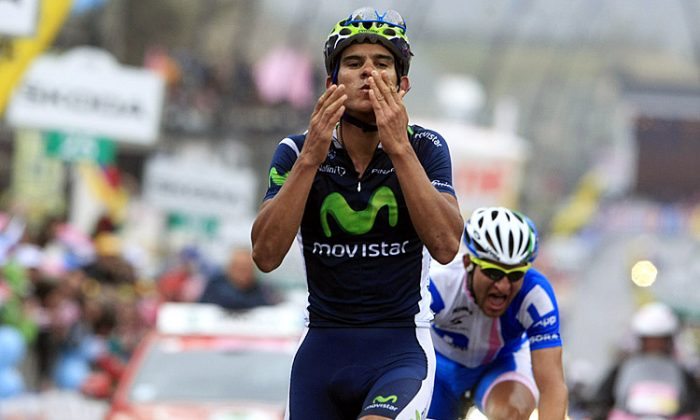 Movistar’s Andrey Amador attacks on the climb to Cervinia during Stage 14 of the Giro d’Italia. (Luk Benies/AFP/GettyImages)
Cycling

Movistar’s Andrey Amador led two other survivors of an eight-man breakaway across the finish line to win Stage 14 of the Giro d’Italia. The Movistar rider took the lead on the long descent between the stage’s two Cat 1 climbs and held on through the final 28 kilometers to beat the other two survivors in the final sprint.

Garmin-Barracuda’s Ryder Hesjedal attacked the peloton in the final three kilometers to finish fourth and retake the leader’s jersey.

“The guys started to accelerate a little bit on the climb,” Hesjedal told velonation.com “I knew it eased off after three kilometers. My legs felt good, I decided to give it a go and test myself a little bit. I tested the race as well. I just felt good, I wasn’t thinking about anything, just putting in an effort and seeing what the other guys were up to. It worked out well, I’m back in the jersey, so that is great.”

There was a danger that no one would attack on Stage 14, saving themselves for Stage 15. Happily things didn’t work out that way at all. Instead many riders attacked in the final five kilometers, including some of the top GC contenders.

Third-placed Ryder Hesjedal of Garmin-Barracuda followed and passed this pair, and rode on to finish fourth and take back the race leader’s pink jersey. Race leader Joachim Rodriguez of Katusha took a shot, but couldn’t get away from the peloton. Colnago’s Domenico Pozzovivo attacked, but was pulled back by Lampre’s Michele Scarponi and Astana’s Paolo Tiralongo.

Liquigas, which has been riding at the front in every stage and through most of this one, ended up gaining three spots for Ivan Basso, who finished 13th, losing nine seconds. Astana’s Paolo Tiralongo gained one spot but lost nine seconds; Sandy Casar lost one place but lost 39 seconds.

As the adage goes, one couldn’t win the Giro on this stage but one could lose it; Astana’s Roman Kreuziger nearly proved that, falling out of the leading two dozen riders on the long last climb. He finished 16th, but still managed to hold onto sixth in GC, though he lost 18 seconds.