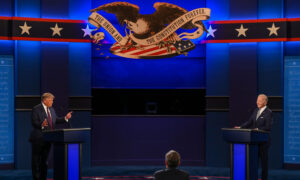 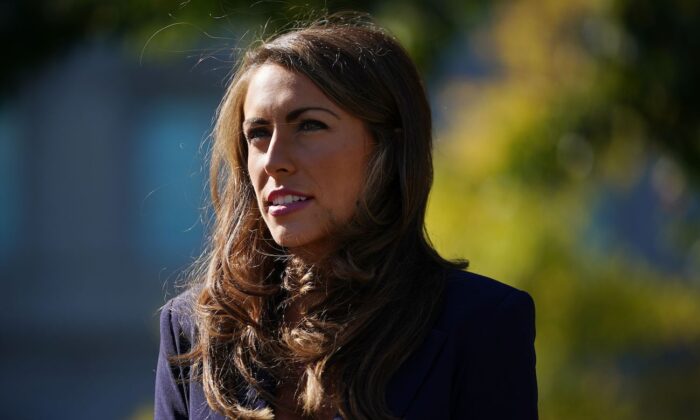 Then-White House Director of Strategic Communications Alyssa Farah speaks to reporters in front of the West Wing of the White House in Washington on Oct. 8, 2020. (Mandel Ngan/AFP via Getty Images)
Trump Administration

Alyssa Farah has resigned from her role as the White House communications director, she announced on Thursday.

“It’s been the honor of a lifetime to serve in the Trump Administration over the last 3 and a half years,” she said in a statement.

She was first a press secretary to Vice President Mike Pence, then a press secretary for the Department of Defense, before taking on the role as the White House communications director. This is the first time a person has served in all three roles within one administration.

“I am deeply proud of the incredible things we were able to accomplish to make our country stronger, safer, and more secure,” she said.

“The ISIS caliphate was destroyed, American hostages were returned, NATO is strong, we’ve brokered historic [Middle East] peace deals, & I was on the ground in Kabul for the announcement of a historic peace deal between the Afghan [government] & Taliban aimed at ending America’s longest war.

“We delivered historic tax cuts, putting money back in the pockets of hard working Americans. We rebuilt the judiciary w/Constitution-abiding jurists & we worked to create the most inclusive economy in American history—that gives every citizen a chance at the American dream.

“Finally, I’m honored to have worked with the entire team on Operation Warp Speed who helped usher in a safe and effective COVID-19 vaccine in record time that will save countless thousands of lives,” she added. “I’m forever grateful to have had the opportunity to serve my country.”

“Thank you Alyssa!” Ivanka Trump, the president’s daughter and adviser, wrote in response.

Before she joined the White House, Farah was the senior adviser and communications director for the House Freedom Caucus, working under Chairman Jim Jordan (R-Ohio) and Mark Meadows (R-N.C.). Farah is a Weyrich-Fuelner policy fellow through the Heritage Foundation.

Democratic nominee Joe Biden has declared victory in the election and media outlets have begun referring to him as “president-elect.”

The Electoral College is scheduled to vote on Dec. 14 to decide the outcome of the race. The votes will be counted during the Jan. 6, 2021, Joint Session of Congress in Washington.