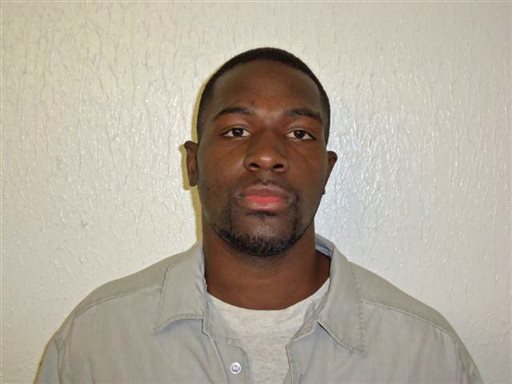 This March 21, 2011 photo provided by the Oklahoma Department of Corrections shows Alton Nolen, of Moore, Okla. Prison records indicate that Nolen, the suspect in the beheading of a co-worker at an Oklahoma food processing plant Thursday, Sept. 25, 2014, had spent time in prison and was on probation for assaulting a police officer. (AP Photo/Oklahoma Department of Corrections)
Crime and Incidents

Alton Nolen Accused of Beheading Colleen Hufford; Mother Says He Could Be Innocent

The mother of accused killer Alton Nolen is speaking out to defend her son.

Nolen, 30, allegedly beheaded Colleen Hufford, 54, at Vaughan Foods after being fired after reportedly trying to evangelize to his co-workers.

He also stabbed another employee.

Mother Joyce Nolen told reporters that her son could be innocent.

“That’s not my son. There’s two sides to every story and we’re only hearing one,” Joyce Nolen said in a video posted to Facebook, reported News OK. “His family — our hearts bleed right now, because what they saying Alton has done. I want to apologize to both families, because this is not Alton, but I just — I’m praying that justice will prevail.”

Alton’s sister Megan, 27, also spoke in the video, saying that they’re praying for the victims and their families.

Employees and friends wait behind a tape for word of loved ones as police investigate an incident at Vaughan Foods on Thursday, Sept. 25, 2014 in Moore, Okla. (AP Photo/The Oklahoman, Steve Sisney)

A truck sits near the entrance to Vaughan Foods in Moore, Okla., Friday, Sept. 26, 2014, the site of an incident where a man beheaded a woman with a knife and was attacking another worker when he was shot and wounded by a company official, on Thursday. (AP Photo/Sue Ogrocki)

Meanwhile, police say charges are expected in the beheading of a woman at a food distribution center in an Oklahoma City suburb.

Moore police Sgt. Jeremy Lewis says murder and other charges against Alton Nolen will be presented to the district attorney for filing Monday.

Cleveland County prosecutors did not return phone calls for comment on Sunday.

Nolen is suspected of attacking two women, beheading one of them, shortly after being fired Thursday at Vaughan Foods in Moore. Police say reserve sheriff’s deputy Mark Vaughan, the company’s chief operating officer, ended the attack by shooting Nolen.

Nolen and the second victim in the attack were both hospitalized and are expected to recover.

A hospital spokeswoman said Sunday that she could not comment on Nolen’s condition.