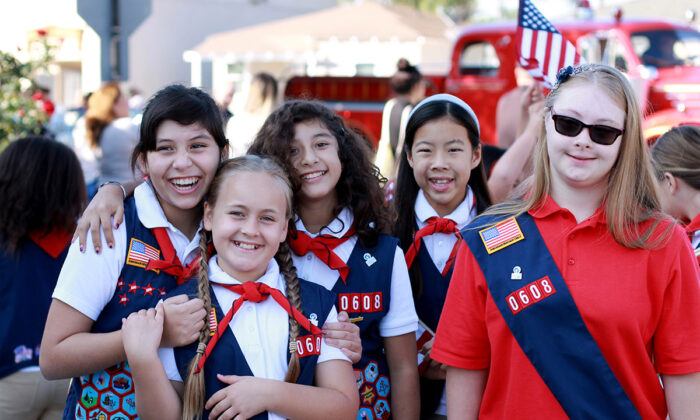 Boys will be boys, and girls will be girls—sugar, spice, and puppy dog tails.

But it’s a mixed-up world today. Boyhood is now “toxic masculinity,” girls are learning to be more like boys, and gender fluidity is the new normal.

The leaders of two alternative youth character development organizations—Trail Life USA and American Heritage Girls (AHG)—disagree with these radical trends in gender identity. They believe that there are essential differences between boys and girls that culture can’t eliminate.

Patti Garibay is the founder of AHG—not because she wanted to be but because she saw it as a calling 27 years ago.

In 1993, Garibay said she began to notice the founding values of the Girl Scouts of the USA slipping away to secular humanism and feminism.

Her answer to this political “mission creep” was to establish an alternative faith-based organization for girls only. She started with a group of parents in West Chester, Ohio, in 1995.

“I see such a tremendous need in our country [for gender-based youth organizations],” Garibay told The Epoch Times. “Our country has been turned upside down; what is wrong is now right, what is right is now wrong.

“Bringing things back to some sanity—right and wrong, allowing kids to be kids—we think it’s important to get back to the basics.”

Trail Life USA started in 2013 in response to changes in the membership standards of the Boy Scouts of America (BSA) to allow openly gay leadership following years of political pressure.

In February, the Boy Scouts of America agreed to pay a $2.7 billion settlement to thousands of men who claimed to have been sexually abused as scouts.

Fast forward to 2022, and the BSA now goes by the gender-neutral Scouts BSA after the organization began accepting girls in 2019.

Garibay helped start Trail Life USA amid a growing exodus from the BSA. She sees the trend only accelerating.

During the past two years, membership in traditional scouting organizations has fallen considerably.

The BSA didn’t respond to a request for its latest membership figures from The Epoch Times.

Garibay feels that both of the iconic youth organizations are no longer founded on spiritual values and are losing members because of it.

“As an American Heritage Girl, I promise to be compassionate, helpful, honest, loyal, perseverant, pure, resourceful, respectful, responsible, and reverent,” its creed states.

In contrast, The Girl Scout Promise states, “On my honor, I will try: To serve God* and my country, to help people at all times, and to live by the Girl Scout Law.

“*Members may substitute the word God in accordance with their own spiritual beliefs.”

“So when you kick out God, that’s what happens,” Garibay said regarding declining mainstream scouting membership.

AHG and Trail Life USA are both similar to traditional scouting in that their members also wear uniforms, organize troops or units, work toward life skills badges, and go on camping trips to explore nature and the joys of growing up. Adults also serve as volunteers and mentors.

In both organizations, parents must sign a statement of faith before a boy or girl is allowed to join.

“Honestly, we believe it needs to be a single-sex organization for kids to feel comfortable to grow and fail forward,” Garibay said.

Trail Life USA CEO Mark Hancock said the organization, based in South Carolina, has grown to nearly 1,000 troops with more than 40,000 members in churches from all 50 states.

“We’re continuing to break records regularly almost every week. We have hundreds of members joining daily,” he told The Epoch Times.

COVID-19 was a factor in raising public awareness of the organization as a haven for boys to be boys.

“During COVID, that increased awareness,” Hancock said. “Coming out of it, we are seeing families just flooding [over to] Trail Life. We’ve hit kind of a critical mass.”

Hancock said 21 new troops, with about 45 members per troop, launched in August. He sees growth continuing as more parents embrace the organization’s spiritual values and reject the modern “woke” culture that blurs the differences between the sexes.

“I think parents that participate realize that boys and girls are different. They’re starting to recognize boys’ struggles in a society that recognizes boyhood as some social disease that needs eradicating. Parents recognize there are very few places their sons can go and not feel shame anymore,” Hancock said.

He also said very few “male-centric” organizations exist that recognize the “strength and wonder of boyhood.”

Trail Life USA’s volunteers currently number roughly 15,000, and many more continue to sign up to serve as role models. Each participant must pass a character screening and background checks before becoming a volunteer.

He said Trail Life USA could survive on membership dues alone and the money raised through store sales. However, the organization does receive private financial contributions, which help fund pilot projects and other program activities.

“That’s the problem the Boy Scouts got into—they depended so much on contributions they had to follow what the sponsoring organizations wanted. That’s kind of how they lost their way. We’re structured so we don’t lose our way because of finances,” Hancock said.

“We follow the biological science. In so many ways, boys are different from girls. We develop programs that speak to the heart of a boy. That’s the difference,” Hancock said. “It’s just sad for boys [today]. We treat boys like they’re deficient girls.”

He said statistics show that boys are more likely to be in special education programs and three times more likely to be diagnosed with attention deficit hyperactivity disorder while falling behind girls in “every academic category.”

“The only thing boys are leading is in suicide,” Hancock said. “That’s because we’ve forgotten how to [raise] boys. It’s starting to show its effects.”

Through Trail Life USA programs, he said the organization sees boys growing in health, self-confidence, and willingness to take risks.

“We’ve removed a lot of risk and competition from our culture, and that’s left boys not aware that they can do hard things,” Hancock said, noting that this can result in a “failure to launch” in many cases. “We challenge them at Trail Life.”

Hancock said about half of all new Trail Life USA members were former Boy Scouts early in the exodus. Many churches that never hosted a Boy Scout troop now eagerly accept Trail Life USA as an outreach of their spiritual ministries. The organization views itself as “trans-denominational,” representing about 30 different religious denominations.

Other popular faith-based youth organizations in the United States include The Southern Baptist Convention’s Royal Ambassadors, The Assemblies of God’s Royal Rangers, The Seventh Day Adventist Church Pathfinders, The Calvinist Cadet Corps, and The Knights of Columbus Columbian Squires.

Navigators USA, the Baden-Powell Service Association, and SpiralScouts International are some of the secular alternatives to mainstream scouting.

“As a culture, we’ve become more aware of how we hurt boys,” Hancock said. “You’d be surprised how many ‘woke’ parents draw the line at ‘don’t make my son into something different.'”

He said that as mainstream scouting moves further away from traditional values, alternative organizations will only reap the reward of new memberships.

“The largest growth we saw was when they opened up to girls,” Hancock said.

AHG currently has 54,000 members across 50 states and 15 countries, partnered with more than 1,300 church ministries.

In Flagstaff, Arizona, AHG Troop AZ0428 Coordinator Missy Page said the troop is now in its 12th year with about 45 young teenage girls.

The troop’s popularity draws memberships as far away as Winslow, Arizona, which is about 60 miles away by car.

Page said the troop is heavily involved in supporting community service projects while working on developing leadership and character skills.

“A lot of our service is girl-led,” Page told The Epoch Times. “We try to call ourselves a leadership and development organization to differentiate ourselves from other organizations.”

She said the troop holds firm to its traditional Christian family values, whether it’s working toward a life skills badge or making goody bags for the local emergency room staff.

“I think young women in particular [are hearing] a lot of voices right now and a lot of background noise that things are not necessarily the value system their parents have at home. I feel comforted knowing my child is an organization that shared my values,” Page said.

She also acknowledged fundamental differences between girls and boys.

Even so, Garibay said of AHG, “We don’t pretend to be what we’re not, [but] God called me into this, and I will see Him through.”