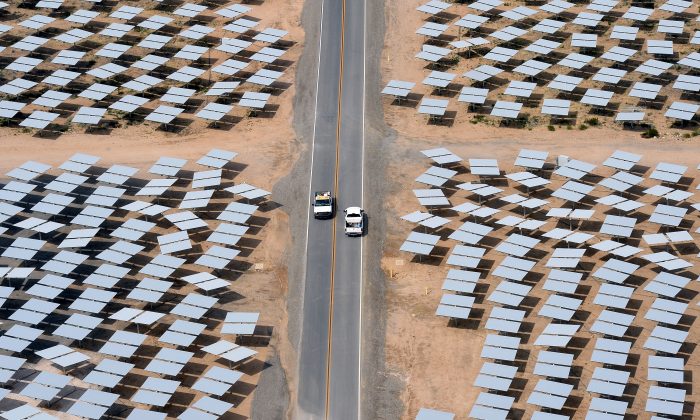 Vehicles travel on a road between rows of heliostats at the Ivanpah Solar Electric Generating System in the Mojave Desert in California on March 3, 2014. (Ethan Miller/Getty Images)
Opinion

Alternative Energy Failures Abroad Should Serve as a Warning

At $3.65 a gallon, gas is already expensive enough. Now imagine paying an additional “carbon tax” every time you fill up.

That’s what a new report from the United Nations has recommended. To combat global climate change, the U.N. has urged governments everywhere to institute a carbon tax or cap-and-trade system as a disincentive for fossil fuel use.

But Germany went down a similar road almost 15 years ago. And in April, it announced a plan to scrap its green efforts. U.S. lawmakers should take note and reject the U.N.’s push for energy policies that have already proven economically disastrous abroad.

Back in 2000, the German government implemented an “energy transformation” plan in an effort to speed up the nation’s conversion to green energy. The costs have been astronomical.

Last year alone, private residencies in Germany paid $9.6 billion in additional fees to subsidize renewable energy production. It’s no wonder why 800,000 Germans have had their power cut off due to missed payments.

For perspective, electricity prices are three times higher in Germany than they are in the United States.

Germany’s industrial sector also shelled out roughly $10 billion in taxes to finance green energy subsidies last year. Because of these unbearable costs, the Federation of German Industries is worried that manufacturers will “lose a competitive edge” internationally. This is especially concerning given that manufacturing represents a quarter of Germany’s economy.

These problems were all predictable—wind and solar simply can’t compete with cheaper fuels like oil. So the government has had to offer huge subsidies to these renewables via taxes on energy bills. Since 2010, this green energy tax has more than tripled. This year alone, the German government expects to spend $33 billion subsidizing renewable energy.

These high costs have left the German government no choice but to amend its energy policy and cut various subsides.

The German case isn’t an anomaly when it comes to the disastrous effects of promoting alternative energy. Spain was forced to abandon a similar renewable energy initiative after the government lost $41 billion on green subsidies.

The United Kingdom’s efforts aren’t performing much better. The U.K. government hopes to generate 15 percent of its energy from renewables by 2020. Unfortunately, this will increase consumer power bills by about $200 each year.

Instead of heeding the warnings of failed green energy policies abroad, the United States seems hell-bent on instituting similar policies at home.

Since 2006, the federal government has awarded nearly $100 billion in taxpayer subsidies to alternative energy producers.

Additionally, the U.S. Department of Energy just announced that it plans to shell out $4 billion in loans to renewables. This would fall under the same program that awarded now-bankrupt solar-panel manufacturer Solyndra $535 million in government funds.

California’s cap-and-trade program has ratcheted up gas prices in the state. Implemented in 2006, the program aims to lower statewide greenhouse gas emissions to their 1990 levels by 2020. To accomplish this, businesses must buy permits if they emit more than 25,000 metric tons of carbon. To make up for this increased permit cost, producers have no choice but to increase prices for consumers.

So California’s gas prices are now 55 cents above the national average, making them the highest in the continental United States. The state’s cap-and-trade program is expected to raise gas prices by another 12 cents per gallon next year. The Boston Consulting Group found that after factoring in the state’s low-carbon fuel standard, gas prices could jump $1.83 per gallon by 2020.

The U.N. report is putting more pressure than ever on policymakers to follow in the failed footsteps of Germany and start taxing energy consumption. That’s why policymakers must be smart. Germany’s blunders—along with Spain’s, the U.K.’s, and our own—illustrate the consequences of forcing alternative energy sources on the economy without considering market realities.

With gas prices already approaching $4 per gallon, consumers cannot afford for U.S. lawmakers to implement policies that have repeatedly proven disastrous. We must reject the U.N.’s recommendations.

Drew Johnson is a senior fellow at the Taxpayers Protection Alliance, a nonpartisan, nonprofit educational organization dedicated to a smaller, more responsible government.