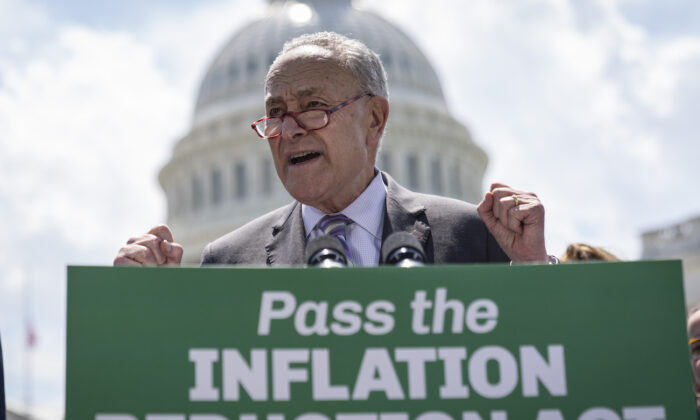 Along With Trump’s Home, Biden Wants to Raid Your Bank Account

How self-destructive can the Democratic Party be? In control of the White House, Senate, and House of Representatives, they’re not satisfied with bearing the blame for the highest inflation in four decades; a recession that has only just begun; a bloody debacle in Afghanistan last year that left 13 of our servicemen and women dead and advertised so much U.S. weakness; treating concerned parents of public school pupils as domestic terrorists at the behest of the public school establishment; and while on their watch, Russian ruler Vladimir Putin invaded Ukraine.

Now, they add to all that not only dispatching the FBI to turn upside down the home of a former president who had been cooperating with investigators, but also releasing a cascade of additions to Americans’ expenses by raising taxes like crazy.

While the FBI raid on Trump’s home at Mar-a-Lago could be construed as an overreach of the rule of law, the taxation assault, however, violates a rule-of-thumb that has been upheld by economists across the ideological spectrum: Don’t raise taxes as recession looms. The clumsily named Inflation Reduction Act will also sic on Americans 87,000 new IRS agents who will be just as determined to root around in the financial privacy of middle-class taxpayers as the armed agents who were shuffling around items in the former first lady’s bedroom.

The independent Penn Wharton Budget Model forecasts that the Inflation Reduction Act “would very slightly increase inflation until 2024 and decrease inflation thereafter,” adding that “these point estimates are statistically indistinguishable from zero, thereby indicating low confidence that the legislation will have any impact on inflation.”

How can a new tax on those who generate jobs not have a negative effect on gross domestic product (GDP)? How can an IRS bureaucracy bigger than the staffs of the State Department, Pentagon, FBI, and the border patrol combined not end up harassing small businesses and taxpayers with modest incomes? After being vandalized and terrorized, crisis pregnancy centers can soon expect visits from IRS “auditors” who “carry a firearm” and are “willing to use deadly force.”

How can billions for Green New Deal boondoggles and subsidizing expensive electric cars not add burden to an agonized economy? How can Affordable Care Act subsidies not further skew the health care market and increase medical costs?

And how does any of this bring down the price of gasoline, meat, milk, eggs, fruits, and vegetables for Americans struggling with skyrocketing prices?

Americans’ energy bills will soon suffer the onslaught of a $6.5 billion natural gas tax. A new methane tax alone could mean “the average customer seeing an approximate increase of 17 percent in their natural gas bill, or over $100 per year for the average American family,” according to the American Gas Association, plus “put more than 100,000 American jobs at risk.”

A tax of 16.4 cents per barrel on crude oil and imported petroleum products will increase taxes by $12 billion, according to the nonpartisan Joint Committee on Taxation (JCT), and is sure to be passed down to drivers in the form of still higher prices at the pump. The more than doubling of excise taxes on coal, to $1.10 per ton from 50 cents (and to 55 cents per ton from 25 cents on coal from surface mining) will be a $1.2 billion tax increase, according to the JCT, manifesting in the form of higher electricity bills.

The 15 percent corporate alternative minimum tax on businesses with $1 billion in profits over three years is a $225 billion tax increase, nearly half of which will hit the manufacturing industry, will cut GDP and kill about 27,000 jobs, according to the Tax Foundation.

The Democrats’ tax on stock buybacks sounds like a narrow attack on the wealthy. In fact, with 60 million Americans holding 401(k)s worth more than $7 trillion, once again it really hurts the middle class as they build and seek to protect their nest eggs.

Blackmailing drug manufacturers with a 95 percent excise tax unless they accept price controls means inevitable shortages of vital medicines and the possible dampening of innovation in developing cures in the future. The Congressional Budget Office warns that the reduction in drug makers’ revenues could reach $1 trillion over a decade.

The JCT also warns that Biden’s change of rules for capital-intensive pass-through businesses with losses is a $52 billion tax increase that will badly hurt smaller firms.

Presumably, the FBI could find something from the raid of Mar-a-Lago so repellent to swing voters that they would accede to four more years of tax increases, massive inflation, crime, social revolution, and diminished national security. But in raiding the pocketbooks of taxpayers, what they find in cash for ever-expanding government they are sure to lose in votes—many times over.