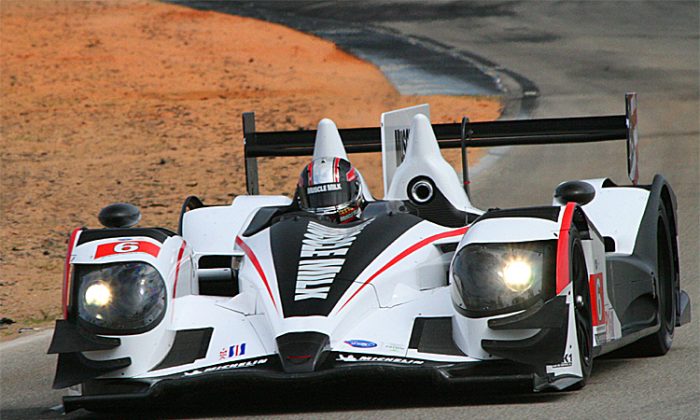 That might not buff out—the TRG Porsche looks like it needs a nose job. (James Fish/The Epoch Times)
Motorsports

Halfway through the final day of the American le Mans Series Winter Test at Sebring International Raceway, All the cars have hit the track, and most are beginning to show their true potentials.

Flying Lizard Patrick Long said the team was making steady progress with the new car, and that the improved aero made the new Porsche GT3 RSR vastly more stable on the bad bumps through Turns 1 and 17.

The top four in GT were all lapping faster that Giani Bruni’s 2011 qualifying lap of 201.561—the wider track and wider tires of the 2012 GTs have made the old records irrelevant.

Corvette and BMW were relegated to fifth and sixth in class, ahead of the Krohn Ferrari and all the other Porsches.

In LMPC, the Dempsey Racing Oreca led the field by .785 seconds, with PR1 Mathiasen, Core # 06, and Muscle Milk trailing. It bodes well for the new team that it leads a field full of experienced drivers and crews already familiar with the car.

The 34 Green Hornet Porsche led GTC ahead of the TRG cars. The 368 TRG Porsche ended the session by crumpling its front end—the last in a long string of spins and slides. Through the middle third of the session, at least half a dozen cars spun, went off, or went straight at Turn Seven.

In the final third of the session, Turn Five took over as the corner to go off at, as several cars went wide on exit and either went four-wheeling across the sand or spun across the track. Every car was able to restart and rejoin, until the TRG car wrecked.

With only a few hours left, several teams will have to scramble to dial in their new cars. If they can’t, the small end-of-February test session might turn into a full-fledged Winter Test Part Two.