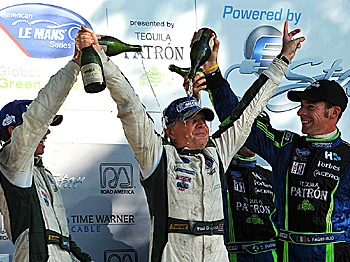 James Fish
alias for Chris J
View profile
Follow
biggersmaller
Print
Johnny Cocker, after a race-long battle which was not resolved until halfway through the final lap, earned Drayson Racing its first prototype win of its American Le Mans Series career, beating the Cytosport Porsche across the line to win the ALMS Time Warner Road Race Showcase at Road America. “We didn't have things go our way at Mid-Ohio, but today we did. Well done to our team,” Mowlem said on americanlemans.com.

Team owner and co-driver Lord Paul Drayson had high praise foe Cocker's effort. "We were so hungry for that win. For [Cocker] to come out and just attack, really it was inspiring. We've been driving together since 2006 and he is an
amazing talent."

The Drayson car started from the pole but lost the lead on the first lap to the turbocharged power of the Autocon Lola-AER piloted by Johnny Mowlem. The Drayson Lola-Judd, with team owner Lord Paul Drayson at the wheel, dropped to fourth.

John Field, in his Intersport Lola-AER, had to start from pit lane, after failing to qualify due to engine troubles. The team borrowed a motor from rivals AutoCon, and managed to make the start.

Mowlem dropped out on lap 25 with transmission problems, and Jon Field made it just a few laps before retiring with engine problems, leaving the fight to the four bigger teams.

Cocker put the big Lola back in front on lap 42 after a yellow flag, but the team knew he would need to pit once more for fuel, while the other LMP cars had just enough fuel to make it to the end.

While his competition tried to conserve fuel, Cocker pushed the Drayson Lola hard, trying to open enough of a gap to have time to pit. He needed 42 seconds; he managed half of that by the time he had to stop on lap 59.

Cocker rejoined the race in fourth, determined to use his V-10 power to push his way to the front.

Traffic was dense and intense, as the class battles in GT and LMP had to share the same real estate. This helped bunch up the LMP leaders, and Cocker wasted no chances, passing Guy Smith in the Dyson Lola-Mazda on lap 61.

On lap 65, Team Patrón Highcroft told David Brabham to turn up the fuel mixture and move on the race-leading Team Cytosport Porsche of Klaus Graf. At the same time Cocker tried to pass the Highcroft car but got into the marbles and ran off the track, dropping back to fourth. With four laps remaining, the Drayson car was almost five seconds back.

“I made a small mistake behind David [Brabham], I lost a bit at Carousel [corner]. Then it was the case just to be flat out to the end,” he explained

The Drayson driver repassed Guy Smith on lap 67, passed David Brabham on lap 68, and took off after the leading Porsche with a lap-and-a-half to go.

The Porsche was in trouble: Klaus Graf was running on fumes. Two turns from the finish line, Johnny Cocker took a run on the struggling Porsche and made the pass.

“On that last lap I could see Klaus hadn't had a splash and suspected he was in fuel saving load. I was expecting to catch him, but not that amount. I think he got caught behind a [GTC] Porsche in turn 9 and the GT in 10. But I knew we had the pace to get on the rear of his car, and to get there in 12 and make it in 13.

“I knew it would be the only opportunity; if I was behind him on the straight I knew he'd be able to block me.”

Klaus Graf in the Cytosport Porsche RS Spyder held on to second, while David Brabham, in the Patrón Highcroft HPD ARX-01c, despite his best efforts could do no better than third.

"The Patrón Highcroft Racing team did the best we could today,” Brabham said in a press release. “We were saving fuel like crazy towards the end and we were really on fumes there at the end.

"To keep Dyson behind and Drayson winning overall was a better scenario for us in the championship.”

Patrón Highcroft maintains a 20-point lead in the championship.

The Dyson Lola-Mazda didn’t break, as it has too often this season, but it also didn’t show the speed it had at Mid Ohio.

“Our congratulations to Drayson Racing on their first ALMS win. They had a fast car and as a team they did a great job today,” said team owner Rob Dyson in a press release.

“We look forward to maintaining our strong momentum at Mosport next weekend and putting the Castrol Mazda back on top.”

The American Le Mans Series heads north for its next race, the Grand Prix of Mosport on August 29, 2010, at Mosport International Raceway just north of Toronto, Ontario, Canada.

Tickets are available through the Mosport Raceway ticket Web page.

The race begins at 3:05 p.m. EDT. Television coverage begins at 4 p.m. on SPEED-TV in the United States