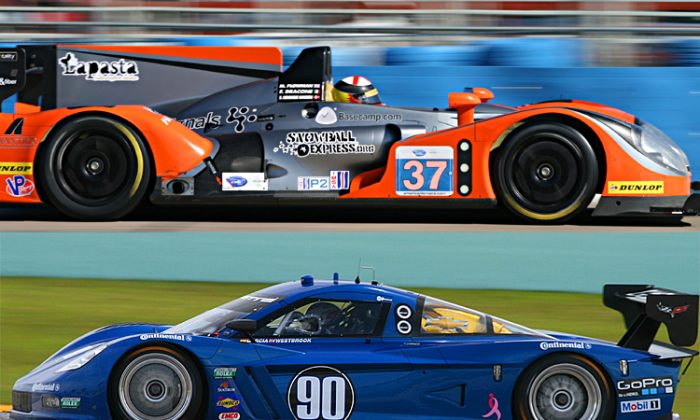 Following up on the Sept. 5 announcement of the merger of North America’s major sports car racing organizers, officials from the American Le Mans Series and Grand Am Road Racing met with representatives from a dozen auto manufacturers in New York City Monday to iron out the regulations for the new combined series and the degree of manufacturer involvement.

“We had a lot of healthy dialogue and commitment to follow-up,” said Bennett in a Grand Am press release. “We formed a list of subcommittees, which will be working groups to cover all aspects of our sport.”

“It was a very productive meeting, and a significant first step,” agreed Atherton. “We’ve come a long way. Having Jim France and Don Panoz and their key people standing shoulder to shoulder in open discussion with 12 manufacturers was a remarkable situation—and it really set the stage for our collective future together.”

ALMS and Grand Am are both in financial difficulties because the two series are splitting a single pool of fans, teams and sponsors. The new, yet-to-be-named combined series hopes to take the strengths of each to create a stable, profitable racing series.

The new combined series will start racing in 2014; rules and class structure need to be determined as soon as possible to give teams and manufacturers time to start planning and building.

Factory involvement brings risks and rewards. When manufacturers are heavily involved in a series they tend to use their promotional powers to increase the series’ profile and thus profitability. However manufacturer involvement also drives up the cost of racing, often squeezing out privateer entries. Further, when a major manufacturer decides to pull out, a series can be left floundering, as happened with ALMS when Porsche, Acura, and Audi left in 2007 and 2008.

Factories need to be included in discussions of regulations because half the field consists of GT cars—highly modified versions of those manufacturers’ street cars—and often those manufacturers will supply engines to the prototypes, the designed-from-scratch racing cars.

Along with briefing the manufacturers’ reps on the current state of planning, the heads of both series created a list of subcommittees dealing with reach aspect of the merger, including personnel form each series on each committee.

“While the main topic was the 2014 regulations—which we hope to announce in the near future—we also took a longer-range perspective,” Atherton said. “We do not want to be narrowly focused. We are putting together plans with both 2014 and the ultimate destination of our unified sports car racing series in mind.”