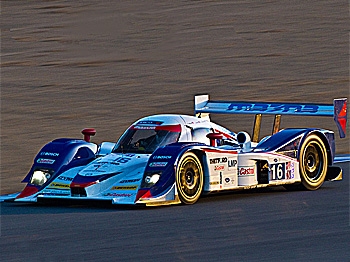 By James Fish
Print
After struggling with a Series-imposed 30-kilogram weight penalty for the first three races of the season, the newly-lightened Dyson Racing Lola-Mazda of Guy Smith and Chris Dyson showed its true speed, capturing the pole for the American Le Mans Series Monterrey at Mazda Raceway Laguna Seca, at Laguna Seca, California late this afternoon.

“There is no better place to put a Mazda on pole than Mazda Raceway Laguna Seca,” commented Chris Dyson on Guy Smith’s pole-winning effort, in the team's press release.

The Isobutanol-powered Lola Mazda turned a lap of 1:12.338, .671 faster than the second-place HPD-ARX01c driven by David Brabham and Simon Pagenaud.

Third was the Cytosport Porsche RS Spyder of Klaus Graf and Memo Gidley, who replaces owner-driver Greg Pickett for this race.

In GT, two Ferraris and a Corvette will lead the grid. Jaime Melo in ther Rsis Competitizione car lapped the track in 1:22.752, three-tenths faster thasn Johannes van Overbeek in the Extreme Speed Motorsports car. Thios was by far the most promising performance out of Scott Speed’s new team.

In GTC Jeroen Bleekemolen beat out Bitch Leitzionger and Andy Lally for the Porsche Cup pole.

Laguna Seca is a six-hour race this year, a true endurance race. Fast at first means nothing; fast last is what counts, and often cars that are too fast don’t finish. The race starts at 2:30 PDT Saturday.

The race is being streamed live on TodoCast. Register to watch (free of charge) at http://americanlemans.com/primary1.php?cat=live

Better still see the race in person. The weather is perfect and Mazda Laguna Seca is one of the most beautiful courses in the country. Tickets are available at the Mazda Raceway Laguna Seca website.