1 in 9 Democrats Bought Gun in Past 3 Months, Poll Shows
0 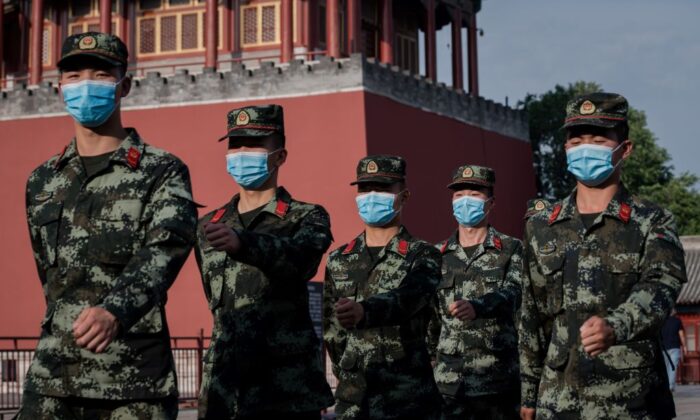 Paramilitary police officers march next to the entrance to the Forbidden City in Beijing on May 22, 2020. (Nicolas Asfouri/AFP via Getty Images)
China-US News

The Chinese Communist Party (CCP) is widely unpopular among Americans, according to an Epoch Times National Poll conducted by Big Data Poll.

The survey, conducted last month, found that 63 percent of American voters hold an unfavorable view of the CCP, with only 7 percent saying they hold a favorable view. Nineteen percent of respondents had no opinion about the political entity that presides over China’s one-party state, while 11 percent said they’ve never heard of the CCP.

The results are consistent with recent polling by the Pew Research Center, which found that Americans had souring perceptions of the Chinese regime amid the COVID-19 pandemic. The July poll found 73 percent of respondents held unfavorable opinions of the regime, an increase of 7 points since the previous poll in March.

The Epoch Times National Poll, which was conducted by Big Data Poll, interviewed 2,169 likely voters nationwide sourced via voter file-verified online survey panels from Aug. 26 to Aug. 30. The sampling error is plus or minus 2.1 percentage points at a 95 percent confidence interval, projecting the electorate at 145 million.

President Donald Trump, who is seeking reelection, and his opponent, Democratic Party nominee Joe Biden, both have campaigned on a platform of getting tough on the regime in Beijing. The Trump administration has in recent months accelerated its pressure campaign on multiple fronts, including China’s state-sanctioned theft of U.S. technology and research, military aggression in the South China Sea, and human rights abuses in Xinjiang and Hong Kong.

Meanwhile, a large proportion of Americans (78 percent) blame the Chinese regime’s initial handling of the CCP virus outbreak for causing its global spread, according to the July Pew survey. Half of the respondents to that poll thought that the United States should hold Beijing responsible, even if it means worsening relations with the country.

Trump has repeatedly criticized the regime for covering up the outbreak and causing the global pandemic. In a recent Fox interview, Trump said he’s willing to decouple from China’s economy “if they don’t treat us right.”

As part of his reelection bid, Trump has pledged to end U.S. reliance on China and bring back 1 million manufacturing jobs in his second term. Biden, meanwhile, has also promised to return critical supply chains to the United States.