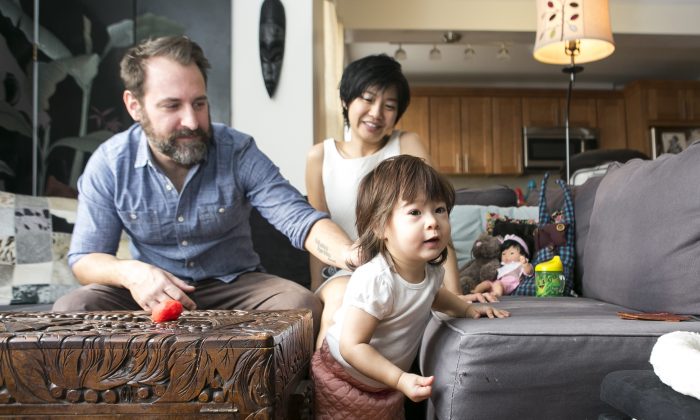 Musician Jeremy Wilms, his wife, actress Di Quon Wilms, and their 21-month-old daughter at their home in Forest Hills, Queens, on Thursday, Jan. 22, 2015. The former Brooklynites took their house hunting to three other states before resuming their search in New York City. (Samira Bouaou/Epoch Times)
News

NEW YORK—Musician Jeremy Wilms and actress Di Quon Wilms wanted to buy their first home together after their daughter was born, and they wanted to stay in Brooklyn. But three months of searching Prospect Heights and Clinton Hill left them feeling discouraged about the housing market in New York City.

“It was just very quickly evident that the prices were just insane,” Wilms said. “Basically converted one bedrooms that were maybe 700 or 800 square feet for half a million dollars and up—that just seemed insane. Even if I had the money, it seemed nuts to me that people would live like that.”

They started to house hunt in California, where they could both work, and in Atlanta “where the grandparents live.” They also considered following other hip Brooklynites to Maplewood, one of New Jersey’s more liberal communities—but the commute to Midtown Manhattan looked like a nightmare.

Wilms plays bass in a band that is releasing an album at the end of March. He has a steady gig in Midtown every weekend, and does production for different music studios during the day.

It was just very quickly evident that the prices were just insane.
— Jeremy Wilms

Quon Wilms has been acting for 15 years. She has done commercials, television, both comedy and drama, and film. Her big screen debut was in “Maid in Manhattan” in 2002 with Jennifer Lopez, and more recently she played Adam Sandler’s nanny in the comedy “Grown Ups.” She also featured in “The Most Beautiful Girl in the World,” one of Prince’s music videos, back in 1994.

Wilms and Quon Wilms met at their best friends’ wedding—they were both in the bridal party. “It’s kind of classic, but that’s actually how it went,” Wilms said.

Quon Wilms moved from her apartment in Manhattan to live with Wilms in his one-bedroom Bedford-Stuyvesant rental about five years ago. Almost two years ago their daughter was born.

“I stopped working as an actress about four months into my pregnancy because, being of a small frame, you could tell pretty early on that I was expecting,” Quon Wilms said.

Their 850-square-foot apartment was not really set up for three people to live comfortably. They had also heard rumors that their landlord was going to sell the building to cash in on the neighborhood’s skyrocketing real estate prices.

“We felt uncomfortable that our rent could change at any minute, and we might have to move,” Wilms said. “We didn’t want to be with a young child running from place to place just to keep searching for affordable rent.”

They also wanted a more child-friendly neighborhood, and the timing was right for them financially to buy. Wilms had a long-term gig on Broadway performing with the musical “Fela!,” and Quon Wilms had a couple of good acting gigs.

It took them almost a year to find the right place.

“We looked in Brooklyn for maybe three months, and then we actually took trips to other cities,” Wilms said, “We were thinking about leaving New York because it was so discouraging, the market.”

After flights to California and Atlanta, they decided to try looking in Queens. “First we fell in love with Jackson Heights, but then we started coming into problems there too,” he said. “The buildings that we liked all had problems in them when we dug into the financials.”

They were frustrated with realtors in Queens that could show them properties, but then seemed unable to close deals. “The first place we put an offer on was kind of botched by the realtor in Jackson Heights, and we knew we wanted someone who was like established and had a good track record,” Wilms said.

They have also been outbid by cash and told by one owner that she would not sell to artists, presumably because they are self-employed. They also tried to buy from one homeowner who threatened to take his property off the market if they didn’t give him what he asked for in his counteroffer.

Quon Wilms researched realtors online that had sold the type of properties they were looking for. She contacted Yael Goldman of Nu Place Realty, who specializes in Forest Hills and its surrounding neighborhoods.

The first apartment Goldman showed them is the one they bought.

“It’s a completely renovated two-bedroom, and we love it. We couldn’t be happier,” Wilms said.

Goldman found them an apartment in a co-op that didn’t require board approval, and can rent it out if Quon Wilms has work in California for an extended period of time.

Their 1,050-square-foot two-bedroom has a spacious living room, polished wood floors, and a newly renovated open kitchen. Quon Wilms said their mortgage repayments and co-op fees are still less than the rent charged for most two-bedroom apartments in Bed-Stuy.

They had hoped to be closer to Manhattan and Brooklyn in terms of public transport. “But the trains out here run express, so that was sort of like the trade off that we took, and actually in a weird way it ended up being convenient for my steady work which is in Midtown in Manhattan,” Wilms said.

“If I didn’t have a kid now and I were 10 years younger I would probably feel isolated, but at this point in my life I’m super happy being out here,” Wilms said. “It’s a beautiful and quiet neighborhood and all my neighbors are great.”