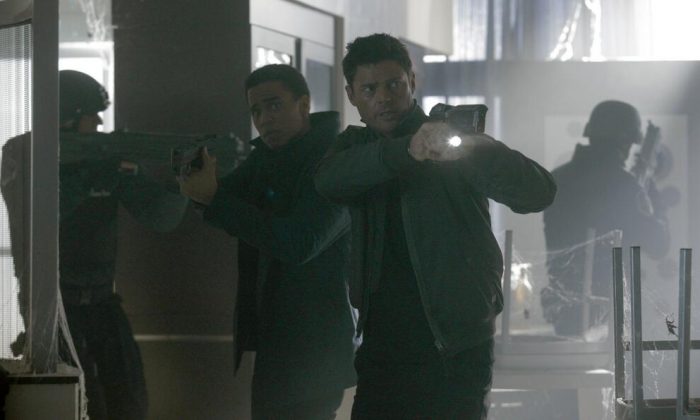 Almost Human season 1 is back with episode 7 on January 6 on Fox. Spoilers from the promo and trailer are below.

The last episode left off with an investigation into the black market of human organs.

The new episode has Detective Kennex and Dorian investigate a psychopathic killer named Simon who is attaching bombs to his victims’ necks and broadcasting and airing their deaths over the internet.

“When Simon goes after Kennex, the team is in a perilous race against time to save him,” according to the episode’s description. “Meanwhile, a power problem affects Dorian’s energy level, making him have strange outbursts.”

In the promo, we get out first look at Dr. Nigel Barr (John Larroquette), who is Dorian’s creator, and who will have a recurring role on the series.

Barr has a plan to deactivate a rogue robot, telling Kennex that he has to approach it from behind and stab it in the back of the neck.

Kennex also is seen showing a group of students a video of a criminal blowing his arm off, which quickly gets the school children ushered away.

The guest stars in the episode are:

Check out Almost Human at 8 p.m. on Fox.