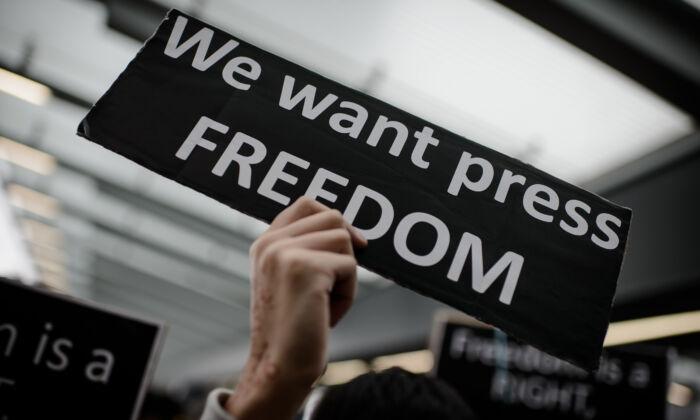 A protester displays a placard during a rally to support press freedom in Hong Kong on March 2, 2014. (Philippe Lopez/AFP via Getty Images)
HK Current Affairs

Almost Half of the Journalists in Hong Kong Consider Leaving: Poll

Nearly half of the journalists and correspondents in Hong Kong are considering leaving as the working environment has “deteriorated significantly” under the Beijing-imposed national security law.

The press freedom survey released on Nov. 5 by the Foreign Correspondents’ Club (FCC) in Hong Kong found that about 46 percent of the respondents were considering or had plans to leave the city.

Nearly 84 percent of the 99 journalists polled think the working conditions have “changed for the worse” since Beijing introduced the sweeping national security law last June.

The vaguely-worded legislation punishes speeches or acts deemed as secessionist, subversive, terrorist, or perceived as colluding with foreign political individuals or groups against the Chinese Communist Party (CCP). Hong Kong police have since arrested over 100 dissidents, mostly against democratic politicians, activists, journalists, and students.

“The rapidly deteriorating political environment in Hong Kong has made me consider cutting short my stay in the city,” a respondent told FCC. “While we’re not planning an imminent departure by any means, myself and several others I know are reconsidering previous plans to stay in Hong Kong over a longer time frame, given the city we arrived in was very different than the city we currently live in. “

Unlike other mainland cities, Hong Kong had once enjoyed vibrant press freedom, which is protected by the city’s mini-constitution, known as the Basic Law. These rights were guaranteed for at least 50 years under the 1984 Sino-British Joint Declaration, a legally binding international treaty signed by Beijing.

However, the majority of reporters surveyed, over 56 percent, said they have self-censored or avoided reporting on what might be considered sensitive stories.

In terms of “sensitive subjects,” about 48 percent are confused about where the “red lines” are in reporting. Those who are more confident in the definitions of sensitive subjects gave a wide range of issues, including Tibet, Xinjiang, and Taiwan. According to the FCC, several respondents said that the “definition could change at any time.”

“These results clearly show that assurances that Hong Kong still enjoys press freedom, guaranteed under the Basic Law, are not enough,” FCC President Keith Richburg said. “More steps need to be taken to restore confidence among journalists and to make sure Hong Kong maintains its decades-long reputation as a welcoming place for the international media.”

In response, the Commissioner’s Office of China’s Foreign Ministry in Hong Kong accused the organization of being “black hands” interfering in the city’s affairs in a Friday statement. The spokesperson warned the FCC to stop making “noise.”

“It is a common international practice for countries to supervise the news media working in their own countries in accordance with the law,” the statement read.

In July, the United States and 20 other countries demanded Beijing end the attack on press freedom in the financial hub after the forced closure of Apple Daily.

The popular local newspaper Apple Daily, which was frequently critical of the city’s government and the CCP, printed its last edition in June after 500 police raided its newsroom, arrested five executives, and froze the key assets. Authorities say dozens of the paper’s articles may have violated the national security law.

Apple Daily’s founder, media tycoon Jimmy Lai, is currently serving a 20-month sentence and waiting for trials on three national security charges. Under the law, Lai could face up to life in prison.

The Hong Kong Epoch Times, one of the few independent media outlets left in the city, also suffered attacks with printing facilities damaged by four intruders and a journalist assaulted, which has led to widespread criticism of the authorities.

The rank of Hong Kong has fallen from 18th place in 2002 to 80th in the Reporters Without Borders’ 2021 press freedom index.

“In many ways, it has become worse than the mainland because nobody knows what the red lines are and there is real fear that previous coverage could be scrutinized,” a reporter told the FCC.