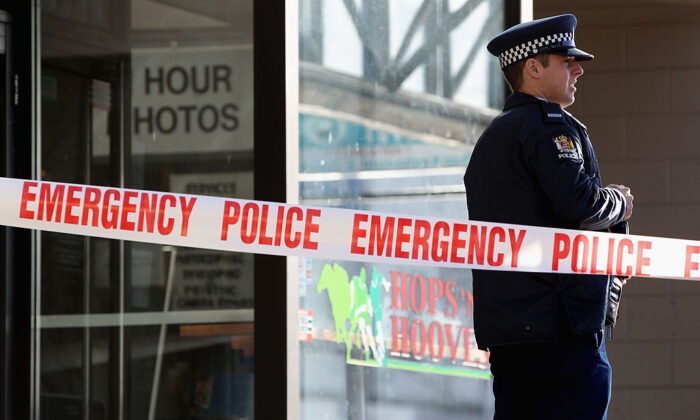 A policeman guards the scene outside a pharmacy in the suburb of Mount Albert in Auckland, New Zealand, on Aug. 24, 2010. (Phil Walter/Getty Images)
Asia & Pacific

Twenty-nine percent of New Zealand adults fell victim to a crime over the 12 months to November 2021, according to a new report by the Ministry of Justice.

The fourth annual publication of the New Zealand Crime and Victims survey reveals that the three most common offences were burglary, fraud, and deception, making up more than half of all crimes.

Almost two-in-five victims experienced two or more crimes during the 12 months and were subjected to the majority of all victimisations (73 percent).

A small group of victims appears to have been repeatedly targeted by offenders, with two percent experiencing 39 percent of all offences.

Repeated offences by family members were the most common type of recurring crime and made up 79 percent of all family member offences.

Just under half of the personal offence incidents were committed by males to females. This proportion increases for family member offences (69 percent) and sexual assault (73 percent).

A personal offence is defined as theft and property damage, sexual assault, other types of assault, fraud and deception, cybercrime, and harassment and threatening behaviour.

Compared to the first crime and victims survey published in 2018, burglaries have had the most significant statistical change. The proportion of households that experienced such an offence fell from 12 to 9.3 percent.

Just One-Quarter of Incidents Are Reported

The survey also found that just 25 percent of all incidents were reported to the police, a figure that has stayed consistent since the survey first began.

The Secretary for Justice Andrew Kibblewhite said the survey was important as a comprehensive data source for crime victims due to the low report rate.

“The results from the [survey] help government agencies to create safer neighbourhoods and communities,” he said.

Kibblewhite noted that a survey is unable to fully reflect the effects of these experiences across families and communities; therefore, the respondents’ experiences should be honoured by improving the justice system and the wellbeing of all New Zealanders.

“Behind each survey record, there are real people with real problems, issues, and experiences of crime in New Zealand,” he said.

Meanwhile, the Ministry of Justice highlighted in a media release that the survey showed 71 percent of New Zealanders were not victimised.

But once differences in age between disabled and non-disabled people were considered, disabled adults were significantly more likely to experience any offence type.

Compared to their non-disabled counterparts, disabled people were more likely to be victimised even after considering employment status, marital status, household size, and household ownership status.

However, one factor that bucked the trend was disabled adults living in rural areas, who were less likely to be victimised than the average non-disabled Kiwi in the same areas.

“Violence and abuse against disabled New Zealanders must be acted on with urgency,” she said in a statement. “These statistics demonstrate the critical need for dedicated prevention and support strategies designed with disabled people and the importance of the community-led approach.”

Other key factors associated with a higher likelihood of victimisation include being younger, not employed, separated, Maori, under moderate or high psychological distress, and living in government accommodation.

The proportion of Maori who were also victims of crime has been consistently higher than any other ethnic group since the first survey.

Factors associated with a lower likelihood of victimisation include being aged 65 and older, Asian, widowed, retired, and having high life satisfaction.

The survey has been running since 2018 and draws on almost 30,000 interviews of randomly selected New Zealanders about their experiences of crime.