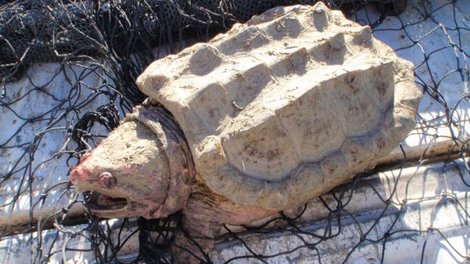 An alligator snapping turtle. (ODFW)
US

The rare creature–which can grow up to 250 pounds–was found last week by wildlife officials last week.

The species is native to southeastern United States but it was the first time the invasive species was found in eastern Oregon, Rick Boatner of the Oregon Department of Fish and Wildlife told KGW.

“I’d hate to see these turtles get established in Oregon,” Boatner said. “We already have problems in the Willamette Valley with common snapping turtles.”

The creature can be aggressive and has a dangerous bite.

An angler fishing on the reservoir reported the turtle and biologists captured it the next day.

The turtle was killed after it was sedated, reported the Statesman Journal.

Biologists aren’t sure whether the turtle, part of a warm water species, could have made it through the winter.

The turtles primarily eat native fish but vary their diet with animals such as ducklings.

Simon Wray, a conservation biologist with the Oregon Department of Fish and Wildlife, said that the turtle was probably being kept by someone as a pet, then released into the reservoir.

“People get these turtles when they are small and release them when they get too big and aggressive to keep as pets,” he said. “It’s a poor choice for a pet and the environment.”