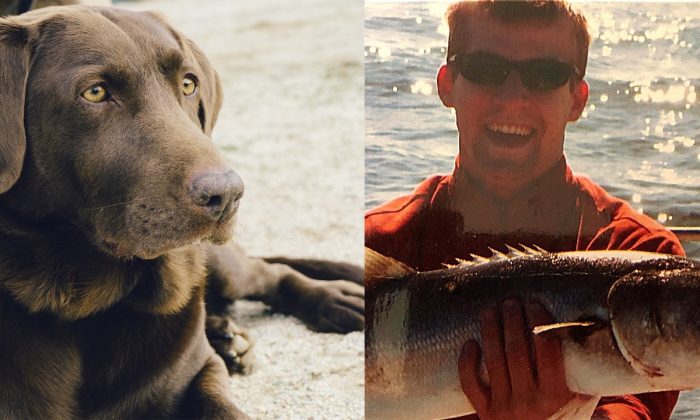 A dog similar to Java, a lab killed by a gator in Florida. (Jay Mantri/Pixabay); A picture of the owner, Andrew Gabriel Epp. (Emily Rhoads/GoFundMe)
Crime and Incidents

In a tragic tale, an alligator roaming around a locality in Florida mauled a service dog on May 17 and its distraught owner killed himself the very next day.

Java, a chocolate colored lab, was a service dog for 36-year-old Andrew Epp, who suffered from mental illness. Java’s tragic death impacted Epp so much that he killed himself on Saturday, according to family and friends.

“It was just such a sad situation, he couldn’t deal with it,” neighbor and family friend Kayla Weston told WFLA.

The Day of the Attack

Java was outside the fenced area of the park with Epp and reportedly got loose from his leash. Sharil Dowling, a witness to the incident told the media that the very next scene she saw was Java covered in blood, slumped over a man’s shoulder.

“I can’t imagine the anguish that guy was in,” she said.

Tim Todd, a frequent visitor to the Dog Leg Park in the last five years, said he knows of at least three dogs eaten by alligators in the area.

Dowling said that such an incident was waiting to happen. “Most people, if they knew they were that close to marsh and gators, they wouldn’t walk back there,” she said.

ICYMI: “It was just such a sad situation, he couldn’t deal with it.”

Request to the County

Triggered by this concern for the dogs, Todd reached out to the county, demanding that it put warning signs around the area.

“It was too late to do anything for that dog, but what could we do to help other people?” said Todd.

Thanks to his demand, snake and alligator warning signs were put around the area earlier this week, according to local reports.

A nuisance gator trapper was also sent to the Dog Leg Park, but so far the alligator that attacked Java has not been captured, News Channel8 quoted a Fish and Wildlife Conservation (FWC) spokesperson saying.

“Persons with concerns about an alligator may call our toll-free Nuisance Alligator Hotline at 866-FWC-GATOR (866-392-4286).

“When someone concerned about an alligator calls the Nuisance Alligator Hotline, we will dispatch one of our contracted nuisance alligator trappers to resolve the situation. Generally, an alligator may be deemed a nuisance if it is at least four feet in length and the caller believes it poses a threat to people, pets or property,” FWC said on its website.

FWC said that those requesting a gator trapper should be able to provide legal access to the area where the alligator is discovered.

Friends and family described Epp as a “gentle, beautiful soul” on GoFundMe.

“He loved the outdoors, fishing, camping, horticulture, and animals. Unfortunately, Andrew also struggled with mental health issues and, after a lifelong battle, took his own life in the early morning on May 18, 2019,” they said on the GoFundMe page.

The community is trying to raise funds for his funeral and for Epp’s mother who needs to relocate to live with her other children after his death.

The community said this is not the first tragedy the family faced. Epp’s older sister passed away at five due to a brain tumor in October 1980. His older brother, Paul also committed suicide in March 2005, and in December 2018 his father passed away due to illness.

“We are collecting money to help with the family with final expenses and to assist in moving Andrew’s mother Donna to live with her children, as Andrew’s passing left her alone,” Ash Epp wrote on GoFundMe.