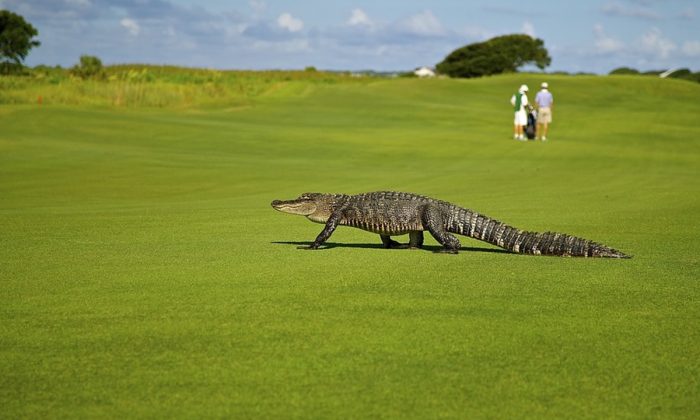 Stock photo of an alligator. (Skeeze/Pixabay)
US News

A Gainesville couple had planned a special date by a Florida lake on May 30 but a hungry alligator had other ideas, eating their watermelon and cheese.

Trevor Walters was about to leave with the Marines for 10 weeks and fiancee Taylor Forte planned a romantic picnic by the side of Lake Alice, reported CBS 4 Gainesville.

Walters said that as soon as they saw the gator approaching them, they were petrified and sprinted away from the blanket.

“He swims up to the bank and just looks us dead in the eyes and then he immediately just sprints up onto the beach,” Walters said.

A Florida couple, enjoying a nice picnic by the lake, got a surprise from an unwanted guest. #FOX35 https://t.co/GMppQE2aBS

He said the hungry animal ate their whole block of cheese. “Gobbled it down, lickity split. The salami didn’t stand a chance.”

The marine said the alligator had no fear of approaching them. “The worst part is we had a big bowl of guac made,” Walters explained. “He eats the whole bowl. He put the whole bowl in his mouth.”

The duo decided to not give up and put up a brave front. “I learned this back in my childhood to scare bears you get up and make yourself big,” Walters told CBS4 Gainesville. “Make a lot of noise. It’s called the bear scare.”

The tactic worked and the gator ran back into the water. Karen Parker with the Florida Fish and Wildlife Conservation (FWC) Commission told the media that the gator’s behavior shows it is used to being fed by people.

“Unfortunately it sounds like that gator has been fed previously and has lost its weariness of people and is beginning to associate people with food,” she said.

Parker said an alligator with such behavior is a trouble maker and the FWC removes them for public safety. She said it’s wise to not feed them to prevent them from crashing people’s picnics.

“We call our trappers and they catch the gator that’s causing problems,” Parker said. “They keep the gator for its hide and meat.”

No one was hurt in the incident. The couple said they were aware of the presence of gators in the lake but didn’t expect their romantic date to go this way.

“No, no, but definitely memorable!” Forte told Fox35.

Video: A rude date-crasher is caught on camera: An alligator crashes a couple’s romantic picnic date and gobbles down their spread of food. https://t.co/nVx3uTPAdk

The American alligator, one of the Sunshine State’s most ubiquitous reptiles, wasn’t always so. At one point, they were hunted to near extinction and placed on the endangered species list but were removed in 1987.

Since then, scientists said gator attacks have been on the rise in Florida.

Humans may be to blame.

According to Inside Science, a science news publication, gator bites in Florida “have been on the rise, increasing from an average of just one every three years between 1988 and 1999 to about seven per year between 2000 and 2016.”

Statistics from the Florida Fish and Wildlife Conservation Commission differ, but still show an increase in the number of alligator bites suffered by humans since gators came off the endangered species list. Bites have increased from about six per year from 1971 through 1986 to about 10 per year from 1987 through 2017, according to FWC data.

As population and development have increased in Florida, scientists said, so too have alligator attacks.

University of North Florida researchers, studying the interaction between humans and alligators, presented their findings to the Ecological Society of America earlier this month. Of the many factors they studied, including temperature and rain, they found that humans were the only logical thing to blame for conflicts.