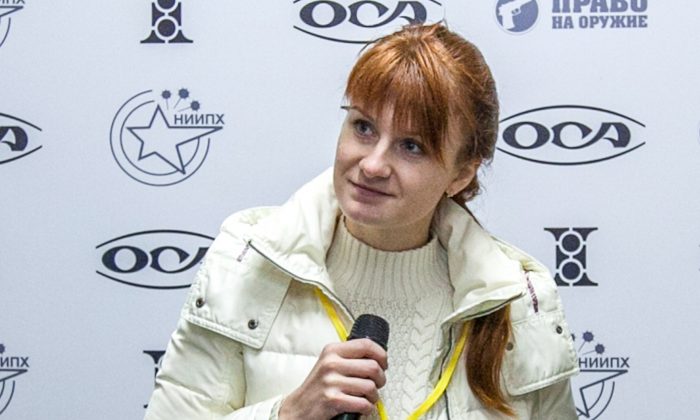 Mariia Butina during a press conference in Moscow, Russia, on Oct. 8, 2013. (STR/AFP/Getty Images)
Crime and Incidents

Maria Butina, allegedly an unregistered agent of the Russian government, is ready to change her previous not guilty plea, according to a court document filed on Dec. 10. Both her lawyers and the prosecutor requested a plea hearing, which the judge set for Dec. 12.

A Russian official instructed Butina, 30, to push for Russian interests in the United States, according to an affidavit (pdf) attached to the Justice Department’s criminal complaint (pdf). Agents of foreign governments are required to register with the Attorney General, which Butina failed to do.

As gleaned from her online footprint, Butina introduced herself as a Russian gun rights activist eager to befriend gun rights advocates in the United States. She attended several events of the National Rifle Association and other conservative events. She was in a personal relationship with Paul Erickson, a conservative political activist, who was in a position to introduce her to people in political circles.

The prosecutors initially claimed she offered sex to a man in exchange for a job at a “special interest organization.” The claim made headlines in major media, but the prosecutors later backtracked as it turned out they misinterpreted Butina’s text messages with the man, only identified as “D.K.”

District Judge Tanya Chutkan chided the government, saying the error damaged Butina’s reputation and that she could tell within “five minutes” the texts were a joke.

Butina allegedly tried—and failed—to organize a meeting between Russian President Vladimir Putin and then-candidate Donald Trump ahead of the 2016 election.

The closest Butina appears to have gotten to Trump was in 2015, when he spoke at the FreedomFest event and she asked him a question from the audience.

Introducing herself as a Russian visitor, she asked what would be Trump’s policy toward her country and whether he’d “continue the politics of sanctions.”

Trump started his answer by criticizing disadvantageous trade relations with other countries, even countries that show no favor to the United States.

He then warned that “incompetent leadership” on part of the United States had driven Russia closer to China, “a horrible thing for this country,” Trump said.

Trump’s opponent, former State Secretary Hillary Clinton, and the Democratic Party have attempted to damage Trump’s reputation by linking him with Russia, prompting a counterintelligence operation by some officials of the Obama administration against people in the Trump campaign. Results of that operation are pending the release of a final report by Special Counsel Robert Mueller, while propriety of the operation will be examined in a Justice Department’s Inspector General report. Both reports are expected to be released soon.

Since becoming U.S. President, Trump has had mixed relations with Russia.

In April, the Trump administration issued sanctions targeting Russian oligarchs and 12 companies they control or own, as well as 17 senior Russian government officials, and a state-owned Russian company that sells arms.

In March, Trump ordered the expulsion of dozens of Russian intelligence officers from the United States in response to Russia’s suspected use of a military-grade chemical weapon in the UK.

Trump also ordered the closure of the Russian consulate in Seattle.

In July, Trump met with Putin in Helsinki, where the two made some progress on potential cooperation in Syria and discussed “the reduction of nuclear weapons throughout the world.”

On Oct. 26, National Security Advisor John Bolton said The White House has formally invited Putin to come to Washington in 2019. It was unclear whether Putin accepted.

In November, Trump canceled his planned meeting with Putin on the sidelines of a G-20 summit in Argentina after Russia failed to release captured Ukrainian ships and sailors.

On Dec. 3, Trump proposed the United States, China, and Russia may come together to “start talking about a meaningful halt to what has become a major and uncontrollable arms race.”

Butina was arrested on July 15, one day before the Trump-Putin summit. She has been in custody and solitary confinement since. The Russian government denounced her detention and dismissed the charges against her.

The new filings do not specify how Butina plans to change her plea, but the only charge she faces is the “conspiracy to act as an agent of the Russian Federation.” The maximum penalty is five years in prison and she is likely to earn leniency if she pleads guilty.