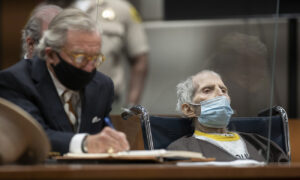 Alleged Killer of Woman Found in Attic Was ‘Obsessed’ With Her, Says Victim’s Mother

Mother of Michigan woman killed and hid in attic says suspect was obsessed with her https://t.co/pwu4hBpN30 pic.twitter.com/MA1JuPIaUn

The mother of Jessica White, whose remains were found in a Michigan attic, said that her alleged killer was “obsessed” with White and wanted to date her.

On May 3, Jordan McClanahan allegedly walked into a police station and confessed the murder of White, but is now pleading not guilty to the first degree murder charges.

“He seemed to have some obsession with her,” Karen White told People magazine. “Every time he was with her he took pictures with her. Half of his pictures [on Facebook] are with her.”

The remains of White’s body were found in an attic crawl space behind a wall in McClanahan’s room, the police said.

Jordan McClanahan’s father takes us inside the home where police say Jessica White was murdered. @Local4News at 5. pic.twitter.com/7fXY5CYqkF

White had been missing for two weeks before McClanahan’s alleged confession, and was last seen with him the night before she went missing.

Karen White said that McClanahan would text her daughter constantly, even though they only saw each other twice a year.

“He would want to hang out with her all the time,” Karen says.

McClanahan wanted to date White, but she didn’t want to. After his mother died last year, White spent more time with him out of sympathy.

“He’s an evil monster,” Karen says. “[What he did] was the worst betrayal.”