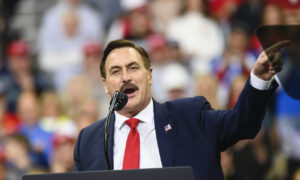 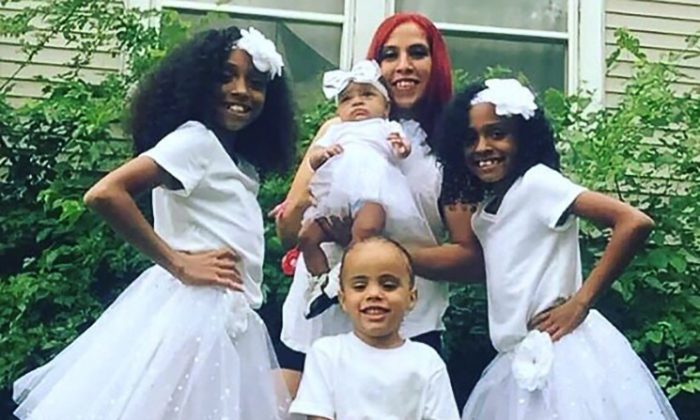 Aries Cobain was the mother of four young children and was 12 months pregnant with a fifth on the night she was killed by an alleged drunk driver. (GoFundMe)
US News

A 29-year-old mother of four was killed by an alleged drunk driver as she tried to push her stalled car out of traffic on the night of Oct. 8.

Aries Cobain, assisted by her cousin, was pushing her stalled 1994 Oldsmobile off of East Lake Street in Streamwood, Illinois, around 7:35 p.m. on Monday night when a driver in a 2001 Toyota pickup slammed into her, according to a GoFundMe page posted by her father. Cobain was pinned between the car and the truck.

Her friend, also pregnant, was behind the wheel. Neither the cousin or friend were injured in the collision.

Cook County Assistant State’s Attorney Jennifer Gates told the Daily Herald that Cobain was “unresponsive in the roadway with massive injuries, substantial blood loss and no heartbeat” when the EMTs arrived.

Aries Cobain was transported to St. Alexius Medical Center where she was pronounced death.

Cobain, who was 12 weeks pregnant, already had four children of ages nine, seven, three, and 6 months, according to the GoFundMe page.

Wilson said that her three-year-old son was having the hardest time understanding what had happened.

“He’s not taking it well at all,” Wilson said. “He recently asked me, ‘Where is mommy? Where is mommy?’ and I’m just like, I couldn’t even explain to him where is mommy. It’s very heartbreaking.”

According to the Daily Herald, the car had stalled in the middle of an intersection. A Hanover Park police officer saw the stalled car and helped the ladies push it into a nearby parking lot.

Cobain’s friend, who was eight months pregnant, felt uneasy about sitting in a strange parking lot waiting for a tow truck to arrive.

Cobain and her cousin agreed to try to push the car back onto East lake Avenue and down the block toward Walnut Avenue, and then to the cousin’s home.

Drunk and Trying to Hide It

The driver of the Toyota truck was caught on police dash-cams throwing alcohol bottles out of his truck windows.

When Streamwood police reached the truck, they found 67-year-old Hinigo Olvera of Schaumburg behind the wheel.

Assistant State’s Attorney Jennifer Gates told the Herald that Olvera was “seen on dash camera video entering his truck, removing two bottles and throwing them into a densely wooded area on the side of the road.”

Police found a 750-ml bottle of Vodka and another bottle containing a small amount of a clear liquid.

Olvera was charged with aggravated DUI resulting in death on Oct. 10. A judge has set his bond at $1 million.

Officers on the scene determined that Olvera was intoxicated, but he refused to take a breath test on the night of the accident. The results of his blood test are pending.

According to the Daily Herald, Olvera faces a possible 14 years in prison if convicted.

The Daily Herald also reported that Olvera already had at least one DUI conviction on his record. He had been given court supervision in that case in 2013.

Olvera managed to raise 10 percent of his bond. He is out on bail pending trial, CBS News reported.