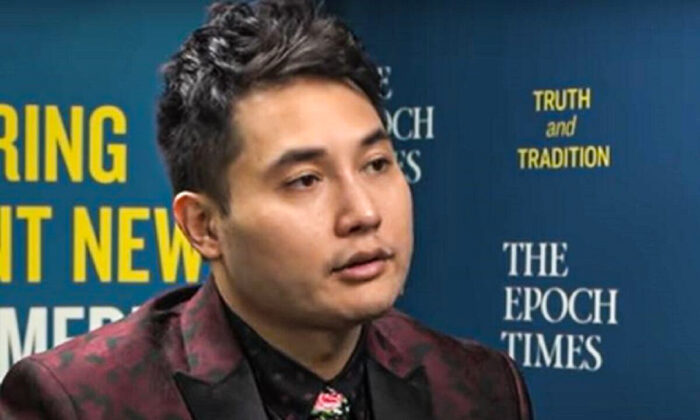 In this file image from video, journalist Andy Ngo speaks to The Epoch Times in West Palm Beach, Fla. (The Epoch Times)
Crime and Incidents

An alleged member of the far-left Antifa network has been charged with robbery in an attack on Andy Ngo, a reporter who regularly covers the extremist movement.

Court documents show that John Colin Hacker was indicted on Oct. 21 by a grand jury on one count of third-degree robbery for an incident that took place on May 7, 2019, in Multnomah County, Oregon.

Video footage recorded by Ngo showed a man who appeared to be Hacker stealing his phone at a 24 Hour Fitness.

According to the grand jury, Hacker “did unlawfully and knowingly, while in the course of committing and attempting to commit theft, and with the intent of preventing and overcoming resistance to defendant’s taking of property and retention of property immediately after the taking, use and threaten the immediate use of physical force upon Andy Ngo.”

“I hope last week’s indictment of Mr Hacker signals a change in the prosecutor’s office in Portland,” Ngo said in a statement. “For years, too many violent extremists falsely claiming to be fighting for ‘racial justice’ have gotten away with campaigns of terror and violence against journalists and citizens.”

“Two years later, this is finally a step in the right direction for the rule of law in Portland, where Antifa has been operating with impunity,” Harmeet Dhillon, a lawyer representing Ngo who is also CEO of the Center for American Liberty.

“There is still a long road ahead for the justice that Andy Ngo deserves. Andy has endured years of harassment, serious threats on his life, and the inability to live in his hometown at the hands of these domestic terrorists. This is a good start, but we’re hoping to see more of these actions,” she said.

Hacker did not have a lawyer listed on the court docket. According to Ngo’s law firm, an active arrest warrant was issued for Hacker’s arrest and he has not turned himself in.

Antifa is a far-left, anarcho-communist network whose members have repeatedly committed violent acts in recent years across the United States. They are most active in the Pacific Northwest.

The video from the gym appeared to show a man assaulting Ngo, who said the male also dumped liquid on him.

Ngo, currently with The Post Millennial, is a journalist known for infiltrating Antifa in disguises and being attacked by members on multiple occasions. He recently penned a book about the group.

“The entire agenda and project of the Antifa ideology, that is, anarchists and communists, is to destroy the United States and to destroy its system. So when they say burn it down, burn the system down, they really do mean that. That system is the rule of law, its systems of governance, elected representatives—all of that. They want to get of rid of all that,” Ngo told The Epoch Times earlier this year.