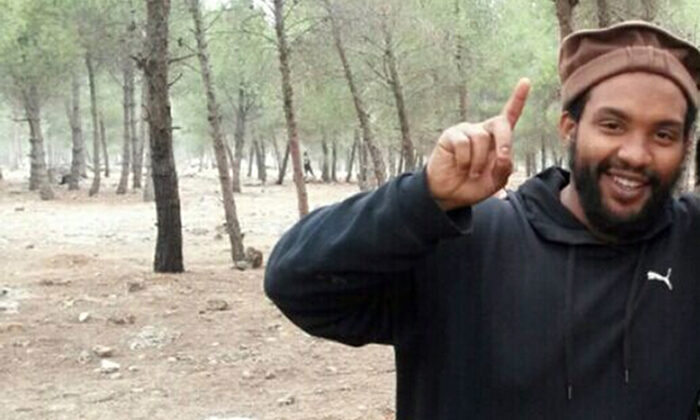 A 38-year-old man alleged to be the fourth member of an ISIS terror cell known as The Beatles is due to appear in a London court on Thursday.

Aine Leslie Davis was arrested on Wednesday evening at Luton Airport after he was deported from Turkey, where he was serving a sentence for being a senior member of a terrorist organisation.

The Metropolitan Police took Davis to a south London police station and charged him with “offences contrary to sections 15, 17, and 57 of the Terrorism Act 2000,” provisions related to funding terrorism and possession of a firearm for a purpose connected with terrorism.

The UK’s Crown Prosecution Service authorised the charges against Davis in 2014.

Davis was convicted of drug offences and jailed in 2006 for possessing a firearm.

He changed his name to Hamza after converting to Islam and traveled to Syria to join the ISIS terrorist group.

The ISIS “Beatles” is said to have four members, all of who grew up in west London. Emwazi was killed in a U.S. airstrike in 2015, the other two were convicted of terror charges in the United States—one sentenced to life imprisonment while the other is due to be sentenced on Friday. The UK revoked both men’s citizenship.

One of the members, Alexanda Amon Kotey, has been sentenced to life in the United States after pleading guilty to actions resulting in the deaths of U.S. journalists James Foley and Steven Sotloff and aid workers Kayla Mueller and Peter Kassig.

The group is also blamed for the deaths of British aid workers David Haines and Alan Henning and Japanese journalists Haruna Yukawa and Kenji Goto.

Mueller’s family was told of her death in an email from ISIS, all others had videos of their beheading or the severed head or body released by ISIS. Some beheading videos featured Emwazi.

El Shafee Elsheikh, 33, was convicted of eight terror charges in April and is facing a mandatory life sentence due to be handed down on Friday.