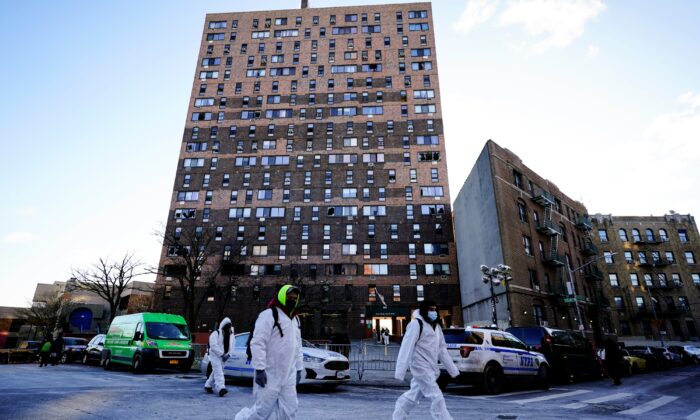 Workers in protective clothing walk from an apartment building in the Bronx borough of New York, on Jan. 11, 2022. (Matt Rourke/AP Photo)
New York

All Victims of Deadly Bronx Fire Identified, Including 2-Year-Old

NEW YORK—Many of the victims of New York City’s deadliest fire in years were still awaiting burial Thursday, after funerals began with services for two children killed by Sunday’s blaze in a Bronx apartment building.

New York City police on Wednesday released the names and ages of the final three victims identified after the deadly blaze Sunday: a 31-year-old woman, a 47-year-old man, and two-year-old Ousmane Konteh, who is the youngest victim.

The eight children who died in the fire range in age from 2–12. The oldest among the victims was a 50-year-old woman.

Community leaders have been huddling to make arrangements for the 17 dead. The vast majority of victims had ties to Gambia.

“The most important thing is really giving each other support. We are all members of the same community, so we are like family,” Haji Dukuray said Wednesday. His niece, Haja, died with her husband and their three children—Fatoumata, 5, Mariam, 11, and Mustafa, 12.

The five are among the dead who have yet to be laid to rest, as are a 2-year-old boy, a mother who died with three of her children, and a husband and wife whose four children are now orphans.

Some families have been waiting for funeral homes to deliver their loved ones and, in some cases, deciding between burials here or having their loved ones returned to Gambia, in West Africa.

The medical examiner’s office said that two of the dead were released earlier in the week and that funeral homes have yet to take possession of the others.

Two victims—Seydou Toure, 12, and sister Haouwa Mahamadou, 5—were remembered Wednesday during funerals at a Harlem mosque.

The medical examiner’s office said all the victims suffocated from the thick smoke that poured out of a third-floor apartment, where officials say a malfunctioning electrical space heater sparked the fire.

Many people escaped the 19-story building, but others died as they tried to make their way down the smoke-choked stairs.