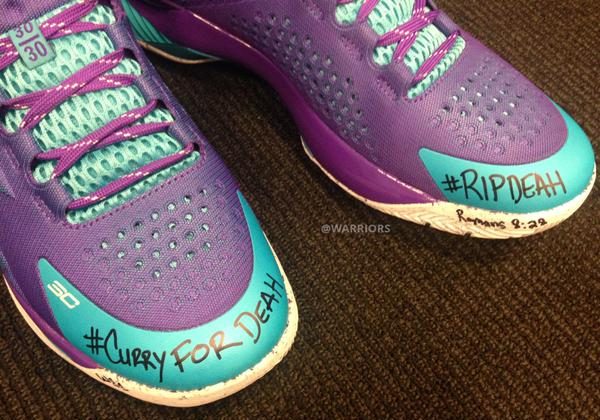 All of Deah Shaddy Barakat’s close friends knew he was a big fan of Golden State Warriors point guard Stephen Curry, and that is why they reached out to Curry to ask him to honor their friend.

In the stands at a recent game Barakat’s friends were using their minds to will Curry to respond to their Twitter calls.

Barakat used to wear the number 30 jersey—Curry’s number—during basketball games. He named the basketball team he played with in local tournaments the Splash Brothers, after the Warriors duo of Curry and Klay Thompson, who were both given the Splash Brothers nickname for their prowess at making three-point shots.

Two months ago, when Barakat married his wife Yusor Abu-Salha, he posed in a wedding photo dressed in a tuxedo and sneakers dribbling a basketball—just like a photo of Curry from a GQ magazine photoshoot.

This past Tuesday, Barakat, Abu-Salha, and his sister-in-law Razan Abu-Salha were gunned down in their apartment in Chapel Hill, N.C. The three were Muslim-Americans who had attended school at the nearby University of North Carolina and North Carolina State University. Local police and the FBI are investigating whether the crime was hate or bias-motivated.

Knowing his admiration for Curry, Barakat’s friends took to Twitter this week with the hashtag, “#Curry4Deah,” in the hopes of getting the NBA (National Basketball Association) All-Star player to honor their friend at an upcoming game.

On Saturday, Curry answered their call. While playing at an NBA All-Star event held at the Barclays Center in Brooklyn, New York City, Curry wore sneakers bearing tribute to his longtime fan: on his right shoe, Curry wrote “#CURRYFORDEAH,” and on his left, “#RIPDEAH.”

“It only seemed right to honor him and his family, and hopefully they know that people are thinking about them,” Curry explained at a Saturday press conference. “They’re not alone, and hopefully it can give them some kind of peace and comfort knowing that he was a special guy. And I just did my little part to shed light toward him.”

Friends in the Stands

Barakat’s friends and members of the local Muslim community came together to watch Saturday’s game. Hassan Rahim was among them.

“Everyone was saying the whole time, please do it for Deah,” said Rahim, 22, via a phone interview.

Curry eventually won the three-point contest, scoring 27 points in the final round. Curry made 13 consecutive three-point shots, making it the second-most made consecutively in event history, according to an ESPN.com analysis.

“Deah really impersonates the kind of guy Curry was,” said Rahim, who first met Barakat five years ago while playing together at local basketball tournaments. “Deah was always a fan because you can see how humble the guy [Curry] is.”

Rahim said Barakat’s brother, Farris told Barakat’s friends that of all the people who reached out to the family after Barakat’s death, no one would’ve mattered more than Curry. “Because Deah would’ve gone nuts knowing Curry did this,” said Rahim.

Rahim and others are already planning their next steps to commemorate their friend. Through a mutual friend who attended school with Curry—who grew up in Charlotte, N.C.—Rahim hopes to convince Curry to wear a T- shirt bearing the names and faces of Barakat and the two Abu-Salha sisters at his next game.