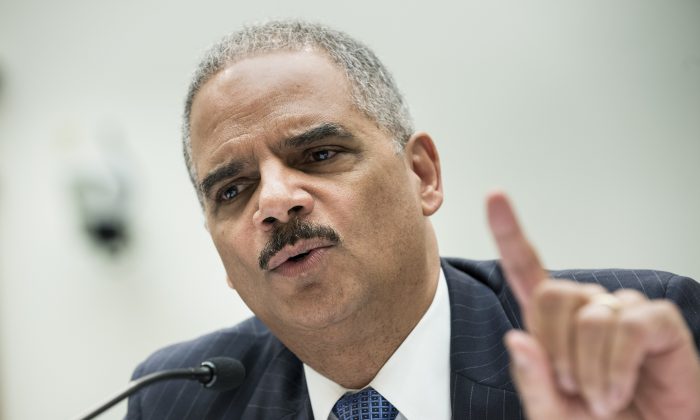 U.S. Attorney General Eric H. Holder testifies during a hearing of the House Judiciary Committee on Capitol Hill May 15, 2013. Congress is considering a new federal shield law for journalists after the DOJ subpoenaed two months worth of Associated Press journalists' phone records. (BRENDAN SMIALOWSKI/AFP/Getty Images)
US

All Power to the Shields

Congress could vote soon on a federal shield law protecting journalists, or more precisely, their sources, from “compelled disclosure,” according to the proposed bill.  The Society  of Professional Journalists set a May 31 deadline for its members to contact their senators. No vote was scheduled as of 3:30 p.m. on May 31, according to the Congressional Record.

The key issue is to limit when the federal government may force reporters to tell how they learned something, and who they learned it from. The recent disclosure that the Department of Justice obtained phone records from multiple staff members at The Associated Press (AP) gave new urgency to the legislation.

A coalition of journalism and civil liberties groups sent a May 24 letter from Free Press CEO and President CEO Craig Aaron to Attorney General Eric Holder which read, “President Obama says journalists should not be at legal risk for doing their jobs. But actions speak louder than words, and guidelines only work if they’re actually followed. The Justice Department’s abuse of press freedom is appalling, and the consequences could be far-reaching. This is not just a matter of concern for journalists or newsrooms; it’s an issue at the heart of our democracy. We can’t hold government and corporate leaders accountable or have an informed public unless we support truth-seeking journalism.”

Matt Wood is policy director for Free Press.  He said, “No shield law is perfect, especially if it’s ignored by the same people who are ignoring their own guidelines now.”  It does not work when a law enforcement agency, which has violated its own policy is judge and jury for itself, according to Wood. Nonetheless, a federal shield law is needed. He wants more independent oversight and congressional oversight of the DOJ.

It is a completely nonpartisan issue. “Everyone is in favor of strengthening the law … because press freedom is a bedrock issue of our democracy,” said Wood.

If the Free Flow of Information Act had been the law before the AP scandal, at the least the government would have had to get approval from a judge before seeking the phone records. A similar law died on the vine after passing the Senate Judiciary Committee in 2009 and being approved in the House in 2009 and 2010.

“A shield law protects checks and balances, as well, providing independent oversight on executive action by requiring judiciary opinions on subpoenas. We cannot allow one branch of government unrestrained, unchecked power. In recent events, The Associated Press had no notice of the DOJ’s records demand and did not have the opportunity to challenge it in court,” according to a sample letter to legislators from the Society of Professional Journalists.

Nearly all, 49 states, and the District of Columbia have shield laws, but there is no national law. According to the text of the law, only criminal investigations and matters that pose danger to the public should be subject to compelled disclosure, and then only after other avenues have been exhausted. It is not clear if such a law would have prevented the AP phone records subpoena.

The Obama administration has prosecuted leakers and whistle-blowers, but it endorses the shield law.