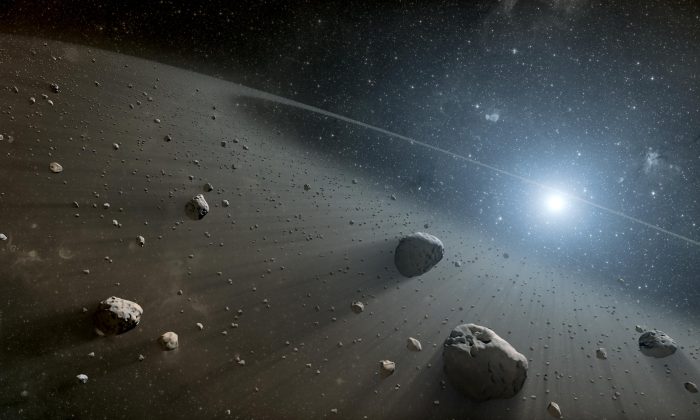 The next mining boom could happen in space. (NASA)
Opinion

One solitary asteroid might be worth trillions of dollars in platinum and other metals. Exploiting these resources could lead to a global boom in wealth, which could raise living standards worldwide and potentially benefit all of humanity.

There are already companies, such as Planetary Resources, hoping to make mining in space a reality.

Peter Diamandis, co-founder of Planetary Resources and founder of the XPrize Grand Challenges, believes that the benefits to humanity give us a moral imperative to explore and utilize space. He has also declared “there are twenty-trillion-dollar checks up there, waiting to be cashed!”

However, behind the utopian rhetoric and dazzling dreams of riches lie some very real problems.

Ownership and the Outer Space Treaty

The framework of international space law is given by the Outer Space Treaty (OST), which entered into force in 1967. Among its main principals, the OST includes these statements:

outer space is not subject to national appropriation by claim of sovereignty, by means of use or occupation, or by any other means

Because the OST is generally interpreted as preventing anything like private fee-simple ownership, it is sometimes claimed to be an obstacle to commercial ventures in space. But such claims simply do not hold water.

There are numerous terrestrial examples where resources are profitably exploited in the absence of fee-simple ownership. Governments routinely license companies to engage in timber extraction, mining, offshore oil exploration, and other activities, receiving royalties’s payments on production.

In the United States, revenues from such royalties totaled some $13.5 billion dollars in 2014 from federally owned or managed lands alone.

Nevertheless, some proponents of mining in outer space argue for serious modification or an end to the Outer Space Treaty and claim, against the evidence, that without fee-simple ownership, there is no incentive for commercial exploitation.

The Unites States’s Space Act of 2015 was just one volley—and a deliberately vague one at that—in this ongoing international debate.

The riches exist, but how will humanity benefit from mining in outer space, or for that matter, other global commons such as the deep sea floor?

Behind the lofty rhetoric of benefits to humanity, there is a dark shadow of voodoo economics, the shambling, walking dead figure of trickle down economics—and the possibility of a world where a few trillionaires enjoy the view from space while others barely eke a living on its surface.

Yet we do suggest that commercial interests and profit seeking can be a healthy part of the exploration of outer space. Yet outer space is not the Wild West frontier of Frederick Jackson Turner, nor do we live in the Gold Rush days of Jack London’s tale of greed and death.

In the common heritage of space, with multiple state and private actors engaging in exploration and potentially exploitation, international cooperation and oversight will benefit all.

There is a balanced, pragmatic approach that will promote commercial and profit-driven activities, while also producing tangible benefits to all of humanity.

Importantly, this pragmatic approach has a well-established precedent that has existed for nearly 40 years. And this comes not from a social democracy or left-wing ideology but was the brainchild of a libertarian, Republican governor of Alaska, Jay Hammond.

That model is the Alaska Permanent Fund Corporation (APFC) created in 1976, and its unique “citizen’s dividend.” The APF is a resource wealth fund, which derives its revenue primarily from leases on oil fields.

In 1977, Hammond suggested that “rather than permitting government to spend all public monies earned through the exploitation of the public’s resources for what government thinks best, let’s grant shares to Alaskans.”

How would this work for outer space?

This would provide the stable business and investment environment that entrepreneurs seek by ensuring international law and obligations are met. This body could license outer space resources and levy a royalty on production, which is part of standard business practice between petroleum and other mining companies and governments here on Earth.

In turn, these revenues, or a significant portion thereof, would be deposited in a Space Resource Fund, possibly under the aegis of the World Bank. And every single citizen on Earth, say aged 18 or above, would receive a dividend on a yearly basis as their rightful share as owners of the common province of humankind.

Crucially, we are not suggesting redistribution, which has been an obstacle to the International Seabed Authority and the Moon Treaty in the past, but a fair share dividend of wealth that truly belongs to everyone.

Asteroid Mining Might be Gold Rush of This Century

Our model doesn’t provide a handout, or a welfare check, or charity from a trillionaire philanthopist; it pays every owner in a global commons a share of what is rightfully theirs.

Even tiny dividends by the standards of the world’s wealthy nations would make a difference for some developing world farmers. If there truly are trillions of dollars out there, then this might be something fundamentally world changing.

We accept that Larry Page and Sir Richard Branson—founding investors and advisors in Planetary Resources—and its founders Eric Anderson and Peter Diamandis, truly want humanity to benefit from outer space, and that they truly believe in corporate social responsibility and a sustainable future. We would encourage them to embrace the idea that the sky really does belong to all of us, as the common “province of all mankind.”

By paying rent for the right to exploit resources in space and royalties on production, the same way oil companies pay to exploit oil in the Gulf of Mexico, they’ll be engaging in business as usual.

They will have bought the right to make a potentially enormous profit and prove they really are responsible global citizens. And they’d get a citizen’s dividend check too.