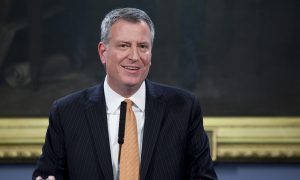 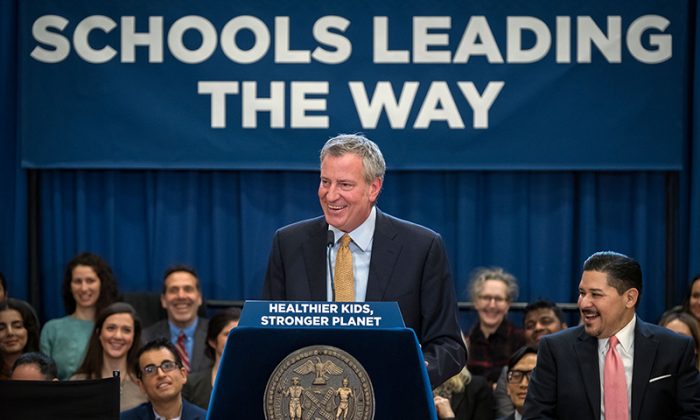 Mayor Bill de Blasio announces the expansion of the "Meatless Monday" program across all NYC public schools that will begin in the fall. (City of New York)
US News

All NYC Public Schools Will Go Meatless on Mondays

New York City public schools will be adopting the “Meatless Monday” program at the beginning of the 2019-2020 school year, city officials announced on March 11.

The program would provide students from the city’s 1,800 public schools with all-vegetarian breakfast and lunch menus every Monday, something Mayor Bill de Blasio said would improve New Yorkers’ health and reduce their environmental impact on the planet.

“We’re expanding Meatless Mondays to all public schools to keep our lunch and planet green for generations to come,” Mayor de Blasio said in a statement.

Meatless Monday is an international movement focused on sustainable meal options. Founded by health advocate Sid Lerner in 2003, the program aims to reduce global meat consumption by 15 percent. The campaign’s website says the movement has programs in more than 40 countries around the world.

In a statement, Lerner called the city’s announcement “a major milestone.” He said, “Through this united effort, New York City’s schools take a leadership role in getting our children on a healthier track, as well as making a positive impact on our environment.”

The program was first piloted in 15 Brooklyn schools in Spring last year. The decision to expand to all city schools came following an evaluation of participation metrics and student feedback.

It will now build on the city’s Free School Lunch for All program and reach the district’s 1.1 million students. The Free School Lunch for All program was launched in the 2017-18 school year to provide free breakfast and lunch to all participating public schools in the city. In the program’s first year, it provided more than 150 million breakfasts and lunches to students. In addition, it provides free breakfast and lunch to any New Yorker under 18 through the Summer Meals program.

For decades we told our kids to eat their vegetables. Now kids are making healthier choices for themselves AND for our planet. That’s why we’ve brought Meatless Mondays to all 1,800 @NYCSchools. pic.twitter.com/dmfwuWl8dB

City officials say the expansion would be cost-neutral. Experts from the Office of Food and Nutrition Services will meet with students to get qualitative feedback before the menu for next fall is finalized.

The Meatless Monday program was previously criticized by former Texas Commissioner of Agriculture Todd Staples in a 2014 piece in the Statesman (pdf). He called the program a “carefully-orchestrated campaign that seeks to eliminate meat from Americans’ diets seven days a week—starting with Mondays.”

#MeatlessMonday ?
What next?
Banning salt and large sodas?
Oh wait, already taken care of by the last mayor.

He also added it was concerning that there were particular groups trying to “convince the public that meat consumption is unhealthy and environmentally unfriendly.”

“While we have plenty of room in the Lone Star State for vegetarians, we have no room for activists who seek to mandate their lifestyles on others,” he wrote.

“I have the solution for schools looking for a way to accommodate individuals who want meatless options: Give THEM meatless options and do NOT force all kids to consume meatless meals. Schools must remain a neutral zone free of agenda-driven propaganda,” he added.

DYK: Going meatless once a week is a great way to become more #plantbased. Choose items like lentil soup, veggie chili or salad to help increase intake of nutrients and fiber and keep your heart happy. #MeatlessMonday https://t.co/DILspNoTPa #NationalNutritionMonth pic.twitter.com/f2PMDFNVom

Along with schools, the Meatless Monday program has also been implemented in some NYC hospitals. In January, NYC Health and Hospital announced that it launched the program in all 11 of its acute care hospitals, with the purpose to provide healthier meal options and encourage patients to make important lifestyle decisions after being discharged.