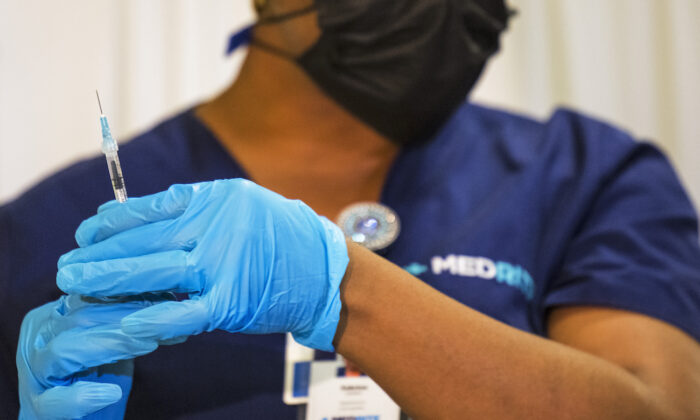 A medical staffer prepares a dose of the COVID-19 vaccine at a vaccination pop-up site in the Lower East Side in New York City, on Nov. 8, 2021. (Michael M. Santiago/Getty Images)
Vaccines & Safety

All New York City residents aged 18 and over are now eligible for a COVID-19 vaccine booster, the city’s top doctor announced Monday.

Dave Chokshi, commissioner of the city’s Department of Health and Mental Hygiene, announced on Twitter that any health care provider in the city “should not turn a patient away if they request a booster as long as they are 18 and older and it has been at least 6 months since a Moderna or Pfizer dose or at least 2 months since a Johnson & Johnson dose.”

More than 630,000 people in New York City have already received an additional dose. Chokshi insisted that “even more can benefit from a booster ahead of winter and the holidays” and said that the commissioner’s advisory he’s issuing means that there are “no access barriers” to adults seeking a COVID-19 vaccine booster shot.

“Clinicians should allow adult patients to determine their own risk of exposure, based on their individual circumstances,” Chokshi said.

The health commissioner also said he is advising health care providers to “proactively reach out to their eligible patients—particularly those 65 and older, those with medical conditions, and those who have received a Johnson & Johnson dose.”

Booster doses of all three vaccine types—Pfizer, Moderna, or Johnson & Johnson—have been cleared for use in the United States.

Studies suggest the efficacy of all three vaccines have declined in recent months in the United States against the Delta variant—representing nearly all cases in the country.

“In my own conversations with patients and family members, I know that booster doses can provide one more layer of reassurance, allowing us to breathe a bit easier, either for ourselves or our loved ones, particularly as we gather and travel around the holidays,” Chokshi asserted.

He noted there has been an “uptick in cases in recent days,” which was anticipated “as the weather gets cooler and people spend more time indoors.”

Mayor Bill de Blasio, a Democrat, said the city would “take the broadest interpretation, most inclusive interpretation of who qualifies to ensure that people who want it get it and are not turned away.”

The recommendation from the city government comes after the states of California, Colorado, and New Mexico, also earlier in the week opened up COVID-19 booster eligibility to all adults aged 18 and over, citing rising hospitalizations.

The Centers for Disease Control and Prevention (CDC) as of Monday states that anyone 65 or older who received a Pfizer or Moderna vaccine at least six months ago or a Johnson & Johnson vaccine at least two months ago “should receive a booster shot.”

The CDC advises that those aged 18 or older, “may receive a booster shot” at least six months after completing the primary series of shots if they have underlying medical conditions or are often in long-term care settings or high-risk settings.

The move by New York City and the three states comes within a week after Pfizer asked the Food and Drug  Administration (FDA) for emergency use authorization for booster shots of its COVID-19 vaccine for all adults. The FDA has yet to decide on Pfizer’s request.

Pfizer previously said that its COVID-19 vaccine efficacy drops over time and insisted that booster doses would be effective at dealing with new variants of the CCP (Chinese Communist Party) virus.

“This isn’t currently the guidance that’s being projected by our health and medical experts because they are looking at and understanding the data,” she said. “We would certainly continue to advise leaders across the country to abide by public health guidelines coming from the federal government,” she added.

About 30.1 million people in the United States have received a booster as of Monday.