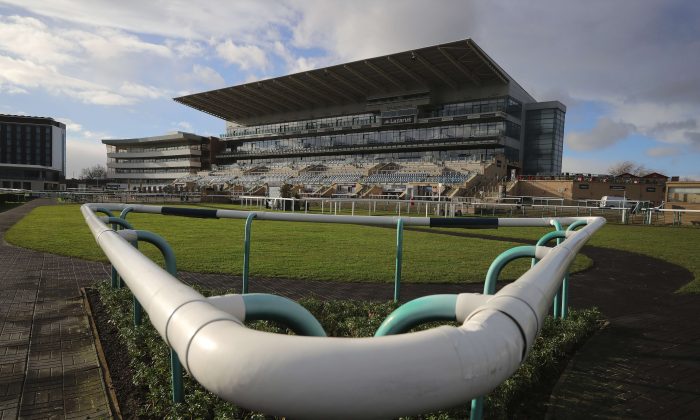 Terraces and stands were empty at Doncaster Racecourse after racing was canceled due to an equine flu outbreak in the United Kingdom on Feb. 7, 2019. (Christopher Furlong/Getty Images)
UK

All Horse Races in UK Canceled After Equine Flu Outbreak

LONDON—Authorities in the UK have canceled all horse racing after an outbreak of highly contagious equine influenza.

Three horses belonging to one British trainer were affected, with all three racing on Feb. 6 against dozens of other horses, potentially exposing them to the disease.

All three of the horses had been vaccinated against the flu, which is endemic in the UK, leading to questions about how they could have contracted the virus.

Equine influenza is highly contagious among horses that haven’t been vaccinated and causes fever, coughing, and nasal discharge. It takes at least a few weeks for horses to recover, and potentially up to six months.

Although it rarely kills adult horses, it can be fatal to young foals and debilitated horses.

Humans aren’t affected by the virus, but they can transmit it. Similar to human influenza, the virus can go airborne and spread when horses cough.

The British Horseracing Authority (BHA), which is investigating the scale and severity of the outbreak, took the precautionary measure of shutting down all racing in the UK to prevent the spread of the virus.

“We are working quickly to identify the extent of the infection and will have more information when further test results are returned today,” the BHA said in a statement. “Following these results being known, a call will be convened to discuss the implications and a decision will then be made as to the impact on racing in the coming days.”

The BHA has contacted all trainers who could have had contact with the infected horses to advise them on biosecurity measures.

They said the fact that the virus had affected vaccinated horses was a “significant concern,” but that the vaccine should “help reduce to a certain extent the effect and spread of the disease in thoroughbreds.”

Similar to human flu, the virus is constantly evolving into various different strains, making it difficult to vaccinate against.

Outside of racing, up to 70 percent of horses in the UK aren’t vaccinated against equine flu, the BHA said.

Since January, there have been eight outbreaks in the UK, according to the Animal Health Trust (AHT), which is monitoring the virus’s status.

Just a few days ago, on Feb. 4, eight thoroughbred horses that had also been vaccinated were confirmed to have the virus in Suffolk County, along with six unvaccinated non-thoroughbreds.

“Of particular significance is that one of the two recently confirmed outbreaks involves multiple vaccinated horses and provides the first evidence of failure of vaccine effectiveness in the UK,” said equine veterinary association BEVA in a statement.

They added that the characterization of the virus is being confirmed, and will be reported to vaccine manufacturers in the next few days.

How the outbreaks occurred in vaccinated horses is currently being ascertained, with the AHT saying that vaccines aren’t necessarily designed to prevent the virus entirely.

“There is often the expectation that vaccines protect horses completely from flu but they’re actually designed to reduce the severity of clinical signs, as well as duration,” an AHT spokesman said in an emailed statement. “Importantly, they reduce virus shedding from the horse, so that they are less likely to transmit the virus to other vaccinated horses.”

Outbreaks of equine flu have been observed in other European countries since December 2018. Though they haven’t so far been linked to the UK cases, they are the most likely source, the BHA said.

The last outbreak of equine flu in the UK was in 2003, when 21 training yards were affected.

In 2007, there was a widespread outbreak of the virus in Australia where horses weren’t vaccinated, leading to an overhaul of the country’s quarantine procedures. It took months before the outbreak was contained.