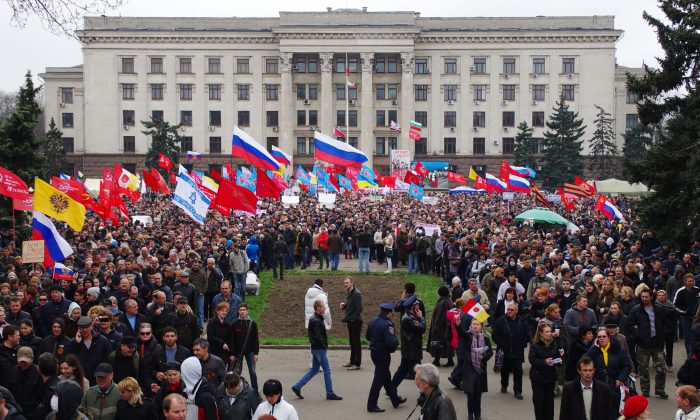 Pro-Russian protesters stage a rally in the center of the Ukrainian city of Odessa on March 23, 2014. Ukraine's Western-backed leaders voiced fears on Sunday of an imminent Russian invasion of the eastern industrial heartland following the fall of their last airbase in Crimea to defiant Kremlin troops. (Alexey Kratsov/AFP/Getty Images)
Crisis in Ukraine

All Eyes on Russia as Ukraine Hurtles Towards Civil War

The Ukrainian government has announced that it will mount a full-scale military operation to regain control of the east of the country and has set a deadline of 6 a.m. on Monday morning for occupied government buildings to be evacuated by armed protesters. An emergency session of the United Nations Security Council late on Sunday night failed to calm a situation that has significantly deteriorated over the past few days.

Pro-Russian armed groups have taken over police stations and government buildings in towns and cities across eastern Ukraine, including Donetsk, Makiyievka, Mariupol, Kharkov, Kramatorsk, Yenakievo, Zaporyzhia, and Harcyzsk. This campaign of destabilization escalated badly in Sloviansk where a gun battle between Ukrainian police forces and armed protesters killed at least one member of the Ukrainian security services.

These events followed a failed attempt by the Ukrainian government on Friday to de-escalate the crisis with promises of federalization and an explicit distinction between non-violent protests and armed occupations of government buildings. It also comes as the “quad”—Russia, the Ukraine, the United States, and the EU—prepare for the first round of direct talks on Thursday in Geneva.

Russia has already hinted that the escalating violence has the potential of undermining the Geneva talks and the Kremlin could very well use the ongoing violence as both an excuse not to attend the talks and as a pretext to “protect” ethnic Russians and Russian-speakers in eastern parts of Ukraine.

If Moscow were to pull out of the talks, this would be yet another clear indication that the Kremlin is not interested in any genuine stabilization of the situation in Ukraine and, indeed, has further plans—if not of territorial annexation, of at least making Ukraine ungovernable and denying the government in Kyiv full sovereignty of what remains of mainland Ukraine and would give Russia a reason to avoid recognizing the results of the Ukrainian presidential elections, currently planned for the end of May, and to continue its current narrative of an illegitimate, Western-backed government in Kyiv solely responsible for the worsening crisis.

Russian geopolitical interests to restore a zone of influence that is permanently under its control can realistically extend as far east as Moldova and as far south as Kazakhstan and potentially further into Central Asia. While annexation of the Baltic states (and especially of Latvia and Estonia with their significant ethnic Russian populations) is off the table because of their NATO and EU membership, Russia could still stir up significant trouble there.

As has become clear from recent events in Ukraine, it only takes small groups of armed men to bring an already volatile situation to crisis point. Long dissatisfied with an ineffective and corrupt central government and its local representatives, local populations in eastern Ukraine are receptive to the relentless Russian propaganda that paints the Kyiv authorities as threatening and Russian actions as legitimate responses to Western attempts to isolate and undermine Moscow. In these terms, Crimea appears to offer a precedent that offers a straightforward “solution” to everything that is wrong with and in Ukraine.

Add to that the easy availability of weapons and multiple local interest groups with their own axes to grind and there is very little that the Kremlin needs to do in order to escalate and expand violent and non-violent unrest. This does not mean that the Kremlin, despite denials, is not behind most of the recent escalation.

The manner in which the armed take-overs were carried out, their predominance in the Donetsk and Luhansk regions, and the similarity of the pattern of local action and Russian reaction there to what occurred in Crimea less than a month ago make it difficult to believe in anything but Russian coordination.

Russia in the Box Seat

The spread of protests and the push-back against armed violence from the Ukrainian government both work in Moscow’s favor. The geographic extent of pro-Russian protests, even if they usually involve no more than a few thousand protesters at best, can be presented as evidence of wide-spread dissatisfaction with Kyiv and desire to follow Crimea’s path. The government’s response, for Moscow, demonstrates the unwillingness of state institutions to respond constructively to legitimate local concerns and the state’s inability to maintain law and order.

Ukraine has no capacity to resolve the situation by force. The EU and United States have no interest in further escalating a crisis that has been deeply destabilizing not just for Ukraine and the post-Soviet region but for the international system as a whole. But for any de-escalation to happen and for a diplomatic solution to gain traction it takes sincere Russian co-operation. The current situation and the recent track record of Russian actions, however, would suggest that the Kremlin is intent on keeping all its options open, including that of an actual military intervention in Ukraine. What little hope the talks in Geneva may offer would thus be to buy time to dissuade Russia from crossing this particular Rubicon.