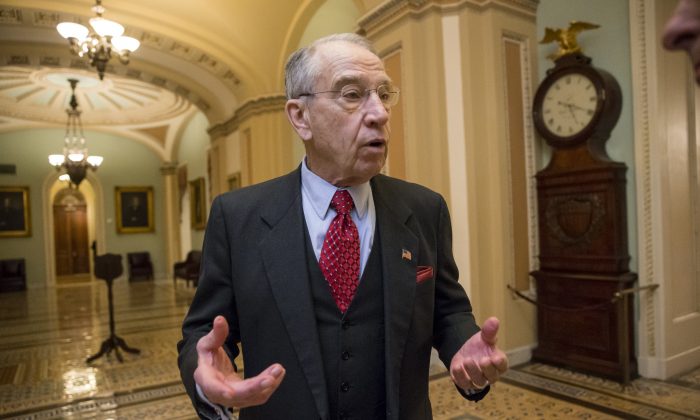 So far, the 82-year-old Iowa lawmaker has delivered a somewhat muddled message.

Hours after Justice Antonin Scalia’s death one week ago, Grassley issued a statement that echoed his Republican leader, Mitch McConnell. “It only makes sense that we defer to the American people who will elect a new president to select the next Supreme Court justice,” Grassley said.

But three days later, Grassley said on a conference call with reporters that he would “wait until the nominee is made before I would make any decisions” on whether to hold a hearing. “In other words, take it a step at a time,” he said.

I would say this isn’t about a person at this point. This is about a process.
— Sen. Chuck Grassley (R-Iowa)

He’s repeated the “step at a time” refrain throughout the week on his multiple stops in Iowa, part of his pledge to visit all of the state’s 99 counties each year.

By late Thursday, Grassley and McConnell had penned an op-ed in The Washington Post, saying the American people should have a chance to decide on the justice through voting in the next election, “rather than a lame-duck president whose priorities and policies they just rejected in the most-recent national election.”

The same day, Grassley and Obama discussed the nomination process over the phone, according to the White House. A Grassley spokeswoman would only describe the call as cordial, and would not say whether the committee will hold hearings. Obama also called McConnell.

Obama has insisted he will fulfill his constitutional responsibility and send a nomination to the Senate. The White House may consider playing to Grassley’s sympathies with its choice.

Some Want to Limit Justices to 18 Years on Supreme Court

Among the possible nominees is Judge Jane Kelly, a former Iowa public defender who was named to the U.S. Court of Appeals for the Eighth Circuit in 2013. Grassley backed Kelly’s confirmation, in part because a longtime friend highly recommended her, he said at her confirmation hearing.

Kelly once clerked for circuit court Judge David Hansen, a onetime county Republican chairman who campaigned for Grassley in first bid for the House, the senator told the committee. Grassley was laid up in the hospital at the time and never forgot Hansen’s work helping him win.

“He gets all the credit for it,” Grassley said.

Some of Grassley’s GOP colleagues have argued against any hearing for Obama’s nominee. The top Democrat on the Judiciary Committee, Vermont Sen. Patrick Leahy, has called for Grassley to move forward.

“I have served in the Senate for more than four decades, and on the Judiciary Committee for 36 years,” Leahy said this week. “During that time, Supreme Court nominees have always been treated differently compared to other nominees—they have always received a hearing and they have always been reported to the full Senate.”

Leahy presided over the panel in 2009 and 2010, when Justices Sonia Sotomayor and Elena Kagan were confirmed. Those nominations were an easier task for Obama, as the Senate was under Democratic control. Grassley voted against the nominations of both justices.

Grassley, who is seeking his seventh term, is a veteran of intense, partisan battles in the Senate. He helped push through President George W. Bush’s tax cuts 15 years ago and was the top Republican on the Senate Finance Committee as the panel considered health care overhaul in 2009 and 2010. Last year, he launched an investigation of former Secretary of State and Democratic presidential candidate Hillary Clinton’s use of a private email account and server.

He also has worked well with Democrats. He and Leahy have combined forces on a criminal justice overhaul, despite opposition from some conservatives.

Grassley’s also known for his genial, folksy demeanor around the Senate, even if he’s occasionally hard on witnesses and corporations or charities he sees as operating outside the law. In recent years he has taken to Twitter, often humorously and with misspellings.

He tweets often, in the last week logging his various town hall visits and mentioning a North Korea sanctions bill— “U can’t trust the fat dictatr,” he tweeted—but he hasn’t said much about what his committee will do with Obama’s inevitable Supreme Court nomination.

He saved those comments for his constituents.

“I would say this isn’t about a person at this point. This is about a process,” Grassley said at a town hall in Muscatine, Iowa.