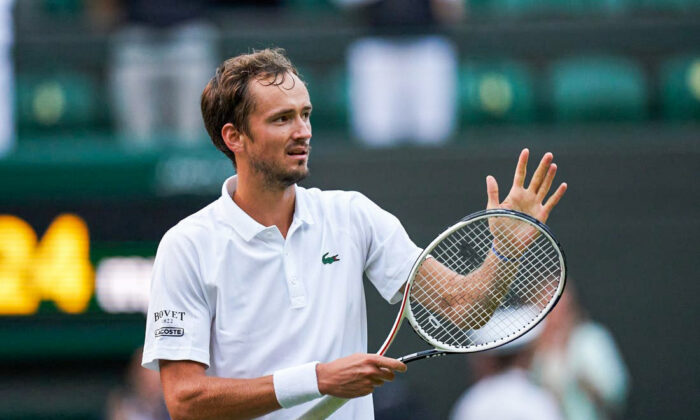 All England Club Stands by Ban of Russian, Belarusian Players

The chairman of the All England Club stood by the decision to ban Russian and Belarusian players from Wimbledon, saying there was “no viable alternative.”

Ian Hewitt made the comments during an interview with ESPN on Sunday, on the eve of The Championships. The AEC’s decision in April came in response to Russia’s invasion of Ukraine.

The decision deprived the likes of world Nos. 1 and 8 men’s players Daniil Medvedev and Andrey Rublev, respectively, as well as world No. 6 women’s player Aryna Sabalenka, among others, from competing in the Grand Slam event.

Hewitt said AEC followed the guidance of the British government, saying it would have been “wrong” to do otherwise.

“One was a route to consider having personal declarations from players and, frankly, we did not think that was the right approach for a tournament of our kind. We were not willing to put in jeopardy any safety of players, and we think that that route would have involved implications for players’ safety or safety of their families, which really left no other viable alternative,” Hewitt told ESPN.

Hewitt added that AEC did not want Russia to use Wimbledon as a “propaganda machine.”

“So as a result of the combination of reasons, we were left with no viable alternative other than to decline entries,” Hewitt said.

“We believe it is a disproportionate approach and frankly we believe it is more damaging to the interests of a large majority of players, and we regret that decision of the ATP and WTA,” Hewitt said. “We respect that opinions do differ, but we would have hoped that there would have been a different way of tackling that in the interests of the players, but as regards our decision, we certainly stand by our decision.”