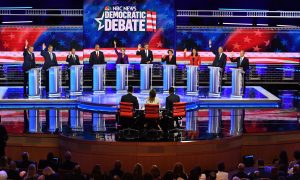 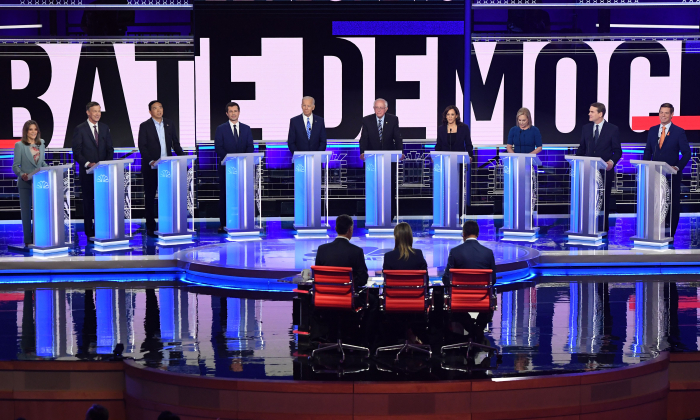 During the second night of the first Democratic presidential primary debate, every one of the 10 candidates agreed that their government healthcare plans would cover illegal aliens.

The current frontrunners of the primary, former Vice President Joe Biden and Democratic socialist Sen. Bernie Sanders (I-Vt.) disagreed on many issues as they took center stage on June 27 in Miami, Florida. But Biden, Sanders, and all of the other candidates agreed that illegal aliens would be covered under their vision for a taxpayer-funded, government-run healthcare plan.

In a separate show-of-hands question, all but one candidate raised their hands when asked—if elected—if they would decriminalize illegal border crossings. The virtually uniform stance on the two questions is a signpost of the where the Democratic field stands on the issue of immigration.

“A lot of you have been talking tonight about the government healthcare plans that you proposed in one form or another,” the host said, prompting for a show of hands. “Raise your hand if your government plan would provide coverage for undocumented immigrants.”

The audience cheered as every candidate raised his or her hand. The host asked South Bend Mayor Pete Buttigieg why he raised his hand.

“Because our country is healthier when everybody is healthier,” Buttigieg said. “And remember, we’re talking about something people are given a chance to buy into. In the same way, there are undocumented immigrants in my community who pay. They pay sales taxes. They pay property taxes directly or indirectly.”

Sales taxes and property taxes are collected by the local government. Buttigieg did not explain how these local revenues could be used to fund a federal healthcare program.

“This is not about a handout,” Buttigieg said. “This is an insurance program and we do ourselves no favors by having 11 million undocumented people in our country being unable to access healthcare.”

There is no law in the United States preventing illegal aliens from accessing medical services.

“As the mayor says, you cannot let people who are sick—no matter where they come from, no matter what their status—go uncovered,” Biden said. “You can’t do that. It’s just gonna be taken care of, period. You have to. It’s a humane thing to do.”

In separate speeches, the candidates expressed support for undoing all of President Donald Trump’s actions on immigration, including restoring the status of illegal aliens under the Deferred Action for Childhood Arrivals program.

From the G-20 summit in Osaka, Japan, President Donald Trump took to Twitter to comment on the candidates’ plans for healthcare.

“All Democrats just raised their hands for giving millions of illegal aliens unlimited healthcare,” Trump wrote. “How about taking care of American Citizens first!? That’s the end of that race!”

In another a show-of-hands question about healthcare, other candidates were asked if they would eliminate their private health plans in favor of a government-run option. Only Sanders and Sen. Kamala Harris (D-Calif.) raised their hands. In a similar fashion, only two of the other 10 candidates raised their hands when asked the same question on the night before.

The question is a kind of litmus test on whether the candidates would push for fully socialized healthcare if elected president. Medicare for All, a plan Sanders has backed for years, would eliminate the private health insurance plans of 180 million Americans and hand control of the healthcare industry to the government. By one estimate, Medicare for All would cost American taxpayers an estimated $32 trillion in the first decade.

“All of the Democrats tripped over each other in a race to see who could stand out as the most leftist candidate, threatening government control of every aspect of people’s lives,” Kayleigh McEnany, the National Press Secretary for the Trump’s 2020 re-election campaign said in a statement.

“We are many months away from seeing who the Democrat nominee will be, but one thing is clear—President Donald Trump will be the hands-down victor after each and every Democrat debate,” McEnany added.

Biden holds a clear lead over the rest of the Democratic field based on an average of polls maintained by Real Clear Politics. He has nearly double the support of Sanders and is 19 points ahead of Sen. Elizabeth Warren.

Candace Owens: The Victim Mentality of the Left