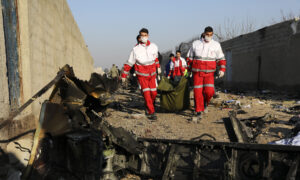 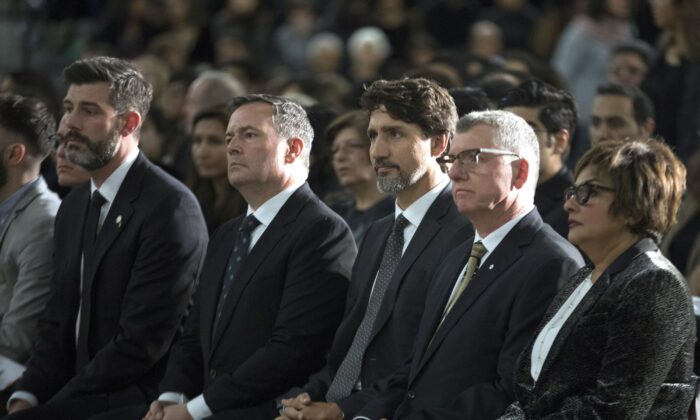 (L-R) Edmonton Mayor Don Iveson, Alberta Premier Jason Kenney, Prime Minister Justin Trudeau, and University of Alberta President David Turpin listen to speeches during a memorial for the victims of the Ukrainian plane disaster in Iran this past week, in Edmonton on Jan. 12, 2020. (The Canadian Press/Todd Korol)
Canada

‘All Canadians Stand With You’: Trudeau Says Iran Crash Families Will Get Answers

Prime Minister Justin Trudeau says it’s been “gut-wrenching” to listen to stories from relatives of 57 Canadians who perished in the downing of a Ukrainian jetliner in Iran last week.

Speaking at a memorial in Edmonton on Sunday, Trudeau said he has learned many of the victims came to Canada in search of new opportunities for their families, but those families are now consumed by grief and outrage.

The plane was shot down by an Iranian missile moments after taking off from Tehran on Wednesday. All 176 on board were killed, including 138 who were headed for Canada.

Iran has admitted the plane was mistaken for a hostile target amid soaring tensions with the United States.

Although the tragedy has hit the Iranian-Canadian community hard, Trudeau called it a Canadian tragedy.

“While no words can ease the pain, the grief, the outrage, it is my sincere hope that you can find some comfort in knowing that all Canadians stand with you,” he said.

Trudeau said some of those who died were brilliant minds at the University of Alberta. One was a husband who lost his wife and 10-year-old son, a boy who one day wanted to be prime minister.

He also spoke of a successful dentist in Iran who had moved with his family to Canada but returned often to Iran so he could pay for courses to become a dentist here. He received his qualifications a few weeks ago.

“He was finally coming here for good, to build the best possible future for his kids,” Trudeau said. “Except that he was on that flight, and now his family has no idea what their future holds.”

Other memorials were held across the country on Sunday.

At the Vancouver Art Gallery, National Defence Minister Harjit Sajjan called the crash a national tragedy and said the government will work tirelessly to get answers for grieving families.

At the University of Toronto, many cried throughout the ceremony as speakers listed victims, including a one-year-old. People broke out in raucous applause several times when various speakers and politicians said Iran would be held accountable.

Fati Mortazavi, whose best friend died in the crash, said having a community come together helped her cope with the tragedy.

“It’s so comforting for us,” said Mortazavi. “As long as we know that someone cares for these people, that’s so important for us.”

Deputy Prime Minister Chrystia Freeland attended the vigil in Toronto and said the loss goes well beyond the university.

“This is Toronto’s loss, this is Ontario’s loss, and this is Canada’s loss,” an emotional Freeland told the vigil. “Nothing will ever replace these brilliant lives that have been cut short. We will always … bear these scars.”

The Canadian Press has independently confirmed at least 74 victims with ties to Canada, many of them students and professors returning after spending the December break visiting relatives in Iran.

Three members of Canada’s standing rapid deployment team arrived Saturday in Iran to establish a base of operations for the Canadian government in the wake of the crash.

Foreign Affairs Minister Francois-Philippe Champagne said Sunday that Iran has approved visas for six more members of the team, who are currently in Ankara, Turkey, as well as for two experts from the Transportation Safety Board.

The eight are to travel to Iran on Monday, Champagne said in a series of tweets.

A spokesman for Champagne said the officials “will be there to provide consular assistance to the families of the victims, including supporting repatriation of remains, to help identify victims and to assist in the investigation.”

The TSB said Sunday it also plans to deploy a second team of investigators who specialize in aircraft recorder download and analysis.

The government’s efforts to get officials on the ground in Tehran have been complicated by the fact that Canada severed all ties with Iran in 2012, shuttering its embassy and recalling all diplomats.

After initially insisting Iran’s military had no role in the crash, Iranian President Hassan Rouhani admitted in a tweet early Saturday that the plane was mistaken for a hostile target and accidentally shot down minutes after taking off from Tehran’s international airport.

Prime Minister Justin Trudeau, who spoke to Rouhani on Saturday, said he demanded that Canada be fully involved in the investigation, including gaining access to the airplane’s black boxes, and being allowed to participate in DNA identification of the victims. He also demanded consular access for Canadian officials to work with grieving families of Canadian victims in Iran.

The downing of the jetliner came just hours after Iran had launched missile attacks on military bases in Iraq where U.S. forces are stationed, in retaliation for a U.S. drone strike on Jan. 3 that killed Gen. Qassem Soleimani, Iran’s top general.

Rouhani’s admission that “missiles fired due to human error caused the horrific crash” sparked two days of protests in Iran.

By Joan Bryden, with files from Colette Derworiz in Edmonton, Hina Alam in Vancouver, and Salmaan Farooqui in Toronto.