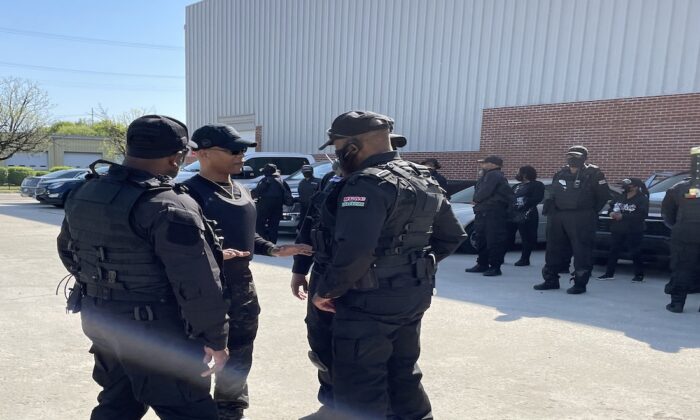 Leader of All-Black Militia Speaks After Trial Is Postponed

LOUISVILLE, Ky.—It was a sight rarely seen for more than 18 months: The all-black militia that captured headlines during the protests of the summer of 2020 gathered again on April 27 outside the Louisville Central Community Center in Kentucky.

“Take formation … I’ve got some ex-military in there who know what they’re doing. Y’all got to help them out,” said John Johnson, leader of the Not [Expletive] Around Coalition (NFAC), as some two dozen veteran and new NFAC members lined up in rows in front of him.

The NFAC had reconvened to support Johnson, who had been scheduled to face trial this week for allegedly pointing a firearm at law enforcement during a protest of the fatal shooting of Breonna Taylor in September 2020.

But at the last moment, District Judge Benjamin Beaton postponed the trial until May 23—much to the dismay of NFAC members who took vacation days and personal time to come from around the country.

The NFAC gathers after the trial of its leader ⁦@TheOfficialGra3⁩ was postponed to next month.
Many NFAC members took vacation days to come to Louisville as a sign of support. The postponement was without notice, as reporters around the globe arrive for the Kentucky Derby pic.twitter.com/ptP8mFCbP8

With their initial purpose for coming to Louisville dashed, the NFAC and Johnson still had plans to make a public appearance downtown that night.

“The place we’re going to eat at is a black-owned family restaurant, where everybody from the 7-year-old to the father works. Then after that, we’re going to take a stroll downtown,” Johnson said.

“We’re not here to challenge nobody.”

But even though Johnson wanted his colleagues to stay tight-lipped, one of his friends had thoughts to share about the trial delay.

“All I know is we’re here to support him, and for some reason, the trial was canceled. We want to know why. Why, during [Kentucky] Derby week, did you cancel his trial?” said the man, who declined to provide his name to The Epoch Times.

Court officials haven’t responded to questions about why the trial was delayed, and the order has yet to be posted on the docket.

The man said he was the local liaison for Johnson and the NFAC.

“They’re from out of town, and this is my hometown. They’re using vacation days, personal days, and now their efforts were kind of wasted,” he said. “They’re here supporting him, and now they’re stuck here, so I now have to play tour guide, so their time isn’t wasted.”

Johnson stressed that the NFAC’s planned walk through Louisville that night had nothing to do with his legal process.

“This is not an NFAC action. I’m on trial. This isn’t a protest or a march. Anybody who protests a trial—it’s a little too late. We’re in the grind now. All you can do is mess up a trial,” he said. “That’s why you don’t see a bunch of people all over the place. I don’t want that.”

Johnson has portrayed the government’s case against him as politically calculated.

“Anybody who plays chess knows that if I get your queen,” he said in an interview last December with AllHipHopTV. “The U.S. government didn’t take long to analyze the movements and realize, ‘If we get him, then at least we can quiet everything down and get things back under control.'”

However, the U.S. government contends that Johnson aimed his rifle at law enforcement officers during a September 2020 protest with the intent to assault or intimidate them.

“A short time after initiating surveillance, [the officers] were blinded by a light, which they shortly thereafter determined was a flashlight mounted to the rifle aimed at them by Johnson,” the government’s complaint against Johnson said.

“All officers advised they were concerned Johnson might intentionally, or even accidentally, discharge a round at them.”

To prove Johnson intended to assault or intimidate the officers on the rooftop, prosecutors apparently plan to introduce inflammatory statements he made about the Minneapolis police officers involved in the death of George Floyd.

“The government’s position in admitting this evidence is that Mr. Johnson’s ‘historical animosity’ and ‘vehement hatred’ directed towards police in general, over time, shows his motive and intent to assault, or at least intimidate the police on this occasion,” Johnson’s attorney, Don Maier, said in an April 1 filing.

In turn, the defense plans to introduce Johnson’s own recorded words and statements.

“The government contends that it is this so-called historical animosity toward police which permeates Mr. Johnson’s thought process, provides motive, and shows intent,” Maier said in his filing. “The defense intends to submit evidence which suggests there is no such historical animosity.”

Johnson faces up to 20 years imprisonment if found guilty. He declined to discuss his group’s chain of command but said the NFAC would continue operating if he ends up behind bars.

“The NFAC is not on trial,” he said, adding that the organization has self-sufficient chapters around the world.