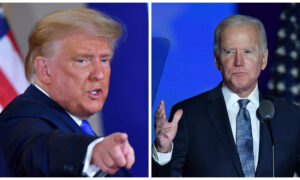 All Americans Need to Feel Good About the Election Process: Rita Cosby

“I speak now as an American too, not just as a journalist, but all Americans have to feel good about the election process,” Rita Cosby said during an interview with The Epoch Times’ “American Thought Leaders” episode that premiered on the evening of Nov. 10.

Cosby said her father was a freedom fighter in Poland who went through very difficult times. She said she feels strongly that Americans should have a fair election process.

“I’m a registered independent. I’m a big believer that the process should be independent of politics because I think the American people need to feel good about where the process is going.”

As a reporter, Cosby covered many elections and was on the steps of the Supreme Court on Dec. 12, 2000, when it handed down (5-4) the famous and controversial decision that settled a dispute between then-presidential candidates George W. Bush and Al Gore.

Cosby said the Supreme Court may again decide the election, referring to the lawsuits brought up by the Trump campaign’s legal teams in multiple swing states.

It’s yet to be seen if these lawsuits could change the outcome of the election, Cosby said, even with Attorney General William Barr looking into it. “If there’s fraud on either side, it needs to be exposed, and it needs to be changed,” Cosby added.

“There could be some dramatic twists and turns,” Cosby said. “The American public needs to be behind [the outcome] in a free and fair election wherever it goes at the end of the day.”