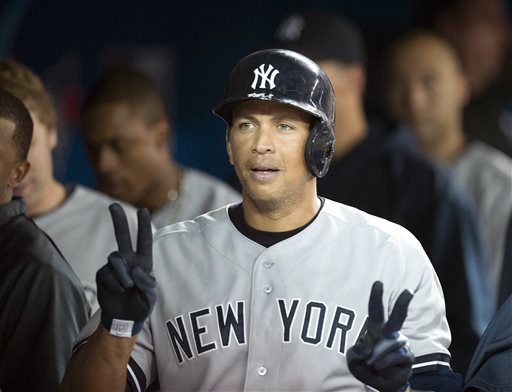 A-Rod celebrates in the dugout after hitting a solo home run against the Toronto Blue Jays during the fifth inning of a baseball game in Toronto on Monday, Aug. 26, 2013. (AP Photo/The Canadian Press, Frank Gunn)
12- OBSOLETE

All About “A” in Baseball Names

With the season upon us and baseball in the air and on the tongue, herewith a primer for novices and super experts. Enjoy, and keeps those letters and suggestions coming.

Advance: The moving ahead of a base runner to the next base as a result of a hit, error, sacrifice, balk, etc.

“All-American Boy”: Superstar slugger Dale Murphy had a long career with the Atlanta Braves and had many nicknames including:

All-Star Game: The idea was conceived in 1933 by Arch Ward, Chicago Tribune sports editor. To give the fans a real rooting interest, Ward suggested that they be allowed to vote for their favorite players via popular ballot. In perhaps no other game do fans have such a rooting interest, although there have been a few periods when voting by fans has been abandoned. Today it appears that Ward’s original principle will remain permanently in effect. The American League won 12 of the first 16 All-Star games, but went on to lose 20 of the next 23 to the National League through 1978. Some memorable moments have taken place in the contest often referred to as the Midsummer Dream Game. In the first game ever played, Babe Ruth slugged a towering home run. The next year, New York Giants immortal Carl Hubbell struck out Babe Ruth, Lou Gehrig, Jimmy Foxx, Al Simmons, and Joe Cronin in succession to make for some more baseball history.

Amazin’ Mets: The first run they ever scored came in on a balk. They lost the first nine games they ever played. They finished last their first four seasons. Once they were losing a game, 12-1, and there were two outs in the bottom of the ninth inning. A fan held up a sign that said “PRAY!” There was a walk, and ever hopeful, thousands of voices chanted, “Let’s go Mets.” They were 100-l underdogs to win the pennant in 1969 and incredibly came on to finish the year as World Champions. They picked the name of the best pitcher in their history (Tom Seaver) out of a hat on April Fools’ Day. They were supposed to be the replacement for the Brooklyn Dodgers and the New York Giants. They could have been the New York Continentals or Burros or Skyliners or Skyscrapers or Bees or Rebels or NYB’s or Avengers or even Jets (all runner-up names in a contest to tab the National League New York team that began playing ball in 1962). They’ve never been anything to their fans but amazing—the Amazin’ New York Mets.

American League Silver Slugger Award: Presented to the best offensive player in the American League for each position. Anaheim Angels The franchise began play as the Los Angeles Angels in 1961, became the California Angels when it moved to Anaheim in 1966 and has been the Anaheim Angels since 1997, after the team negotiated a 30-year lease with Anaheim. Angels derives from Los Angeles, the “City of Angels,” where the team started. Since 2005, the franchise officially has been the Los Angeles Angels of Anaheim.

Appeal Play: An appeal play occurs when a defensive player claims a runner did not touch a base and urges the umpire to call the player out. The defensive player must tag the runner or the base to get the appeal considered.

Apollo of the Box: Hurler Tony Mullane, a tribute to his handsome appearance and playing position. Mullane was also called “The Count” or “Count.”

Arizona Diamondbacks: Nickname derived from the Diamondback Rattlesnakes that are in the Arizona desert.

Arkansas Hummingbird: Lon Warneke, a pitcher for the Chicago Cubs and St. Louis Cardinals from 1930-1945, hailed from Mt. Ida, Arkansas.

Around the horn: A phrase describing a ball thrown from third base to second base to first base, generally in a double-play situation.

Assist: A player’s throw to another player on his team that results in a putout.

Astroturf: Not all of the artificial carpets that now have taken root in ball parks and stadiums in the United States and around the world are produced by the Monsanto Chemical Company. AstroTurf was the first, however, having been installed when the Houston Astrodome opened in 1965, and that’s why the term has almost become a generic one for artificial sod. There is also Tartan Turf (made by Minnesota Mining and Manufacturing) and Poly-Turf (a product of American Bilt-Rite). Resistant to all types of weather, more efficient to keep up than grass, better for traction than most other surfaces, synthetic “grass” has continued to “grow” throughout the world of sports, despite complaints that it results in more injuries for players. Studies focused on injuries are still in progress, while other research is under way aimed at improving the quality of the artificial carpets.

At bat: An official time up at the plate as a hitter.

Athletic Hose: White socks worn under stirrup socks as part of a baseball uniform
Atlanta Braves  The franchise began in 1871 known as the Boston Red Stockings and then by several other names including Beaneaters through 1906, Doves when the Dovey family owned the franchise, 1907-1910. In 1911, the nickname changed for new owner James Gaffney, a Tammany Hall “Brave.” From 1936-1940, the team was called Rustlers, Braves, Bees. In 1941, the Braves nickname returned and has stuck with the franchise through moves to Milwaukee in 1953, Atlanta in 1966.

Away: A pitch out of the reach of a batter. A side retired in its half of an inning.

Away uniform (grays): distinctive (non-white) clothing worn by a team when playing “away” games.