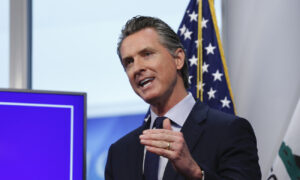 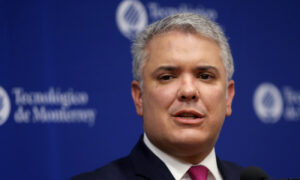 Colombia's CCP Virus Quarantine Extended Through End of May
0 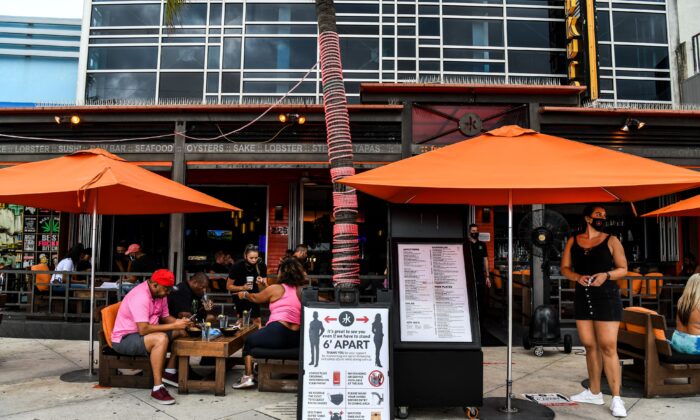 A sign board with precautions is kept in front of a restaurant as people eat sitting outside on Fort Lauderdale Beach Boulevard in Fort Lauderdale, Fla., on May 18, 2020. (Chandan Khanna/AFP via Getty Images)
US News

Every state has relaxed harsh restrictions implemented to try to slow the spread of the CCP virus, but the new rules vary widely.

Some governors have loosened few restrictions, leaving residents largely confined to their homes. In other states, people are free to dine out, travel for pleasure, and congregate in large groups.

“Friday, we’re open for business across the state of Alaska,” Republican Gov. Mike Dunleavy told reporters on May 19. “It’ll all be open, just like it was prior to the virus.”

Most are run by Republicans, but not all.

Montana Gov. Steve Bullock, a Democrat, let schools reopen earlier this month. Groups of up to 50 will be allowed to gather on June 1 and many businesses, including gyms and movie theaters, have resumed operations.

Week four of West Virginia Gov. Jim Justice’s six-week reopening plan starts May 21 with the resumption of indoor dining at restaurants and the reopening of adventure sports, large retailers, and malls.

“We’re getting closer to a drug and a vaccine and every day that goes by, we’re getting better,” Justice, a Democrat-turned-Republican, said at a press conference.

Visitors to the state no longer have to self-quarantine for two weeks after they arrive.

A full reopening means all businesses can reopen and all activities can resume, but some social distancing rules stay in place.

Governors across the nation have pointed to modeling that once predicted a deluge of hospitalized patients not panning out.

“We no longer believe our hospitals will see an overwhelming amount of ICU patients who need ventilators, as we once believed, and that is sure good news,” Alabama Gov. Kay Ivey, a Republican, told reporters on April 28.

Most states have avoided the spikes in confirmed cases that critics predicted would occur after reopenings started. Some states have reported increases in positive tests but that’s happened in parallel with increases in testing.

Florida Gov. Ron DeSantis and Texas Gov. Greg Abbott, both Republicans overseeing two of the nation’s three most populous states, have joined others in easing many restrictions.

Restaurants can serve customers inside in both states while a variety of professional sporting events are set to resume soon with no spectators.

Theme parks are reopening in Florida; rodeos are resuming soon in Texas.

Other governors have been extremely cautious. Connecticut Gov. Ned Lamont, a Democrat, held off on easing any restrictions until May 20. Massachusetts, helmed by Republican Gov. Charlie Baker, just started reopening Monday. Maryland Gov. Larry Hogan, a Republican, finally eased restrictions last week. Democratic Wisconsin Gov. Tony Evers, who eased few rules, directed a health official to extend his stay-at-home order to May 26 before it was blocked by the state Supreme Court, allowing many businesses to reopen.

A small selection of Illinois companies have been able to reopen under tight restrictions that include no customers entering the stores. Democratic Gov. J.B. Pritzker is planning for a wider reopening on May 29 but won’t let restaurants resume tableside service until late June.

Dr. Robert Redfield, director of the Centers for Disease Control and Prevention (CDC), said this week that states are ready to reopen but called for expanded testing and programs that identify people who came into contact with COVID-19 patients.

The CDC said Tuesday it’s providing $10.25 billion to states, territories, and local governments for COVID-19 testing, including for the development surveillance and contact tracing programs.

“As the Nation cautiously begins the phased approach to reopening, this considerable investment in expanding both testing and contact tracing capacity … is essential,” Redfield said in a statement. Americans should continue social distancing, washing their hands, and using face coverings, he added.

Health Secretary Alex Azar said the investment will help Americans get safely back to work and school.