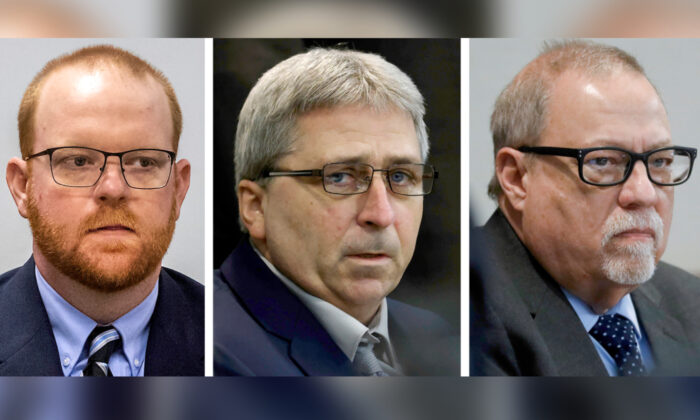 (L-R) Travis McMichael, William "Roddie" Bryan, and Gregory McMichael during their trial at at the Glynn County Courthouse in Brunswick, Ga., in a file photo. (Pool via AP)
Judiciary

Father and son Greg and Travis McMichael grabbed guns and jumped in a pickup truck to pursue the 25-year-old black man after seeing him running in their neighborhood outside the Georgia port city of Brunswick in February 2020. Their neighbor William “Roddie” Bryan joined the pursuit in his own pickup and recorded cellphone video of Travis McMichael fatally shooting Arbery.

The defendants told police they suspected Arbery was a fleeing burglar when they armed themselves and jumped in a pickup truck to chase him on Feb. 23, 2020.

Their lawyers contended the McMichaels were attempting a legal citizen’s arrest when they set off after Arbery, seeking to detain and question him as a suspected burglar after he was seen running from a nearby home under construction.

Jason Sheffield, a fellow defense attorney for Travis McMichael, said that McMichael acted only in self-defense and didn’t wake up intending to kill Arbery. Last week, McMichael waived his Fifth Amendment right and testified that he shot Arbery in self-defense.

“It was obvious that he was attacking me, that if he would’ve got the shotgun from me, then it was a life or death situation,” McMichael said. “And I’m gonna have to stop him from doing this, so I shot.”

But prosecutors rejected the self-defense argument.

“They shot and killed him,” lead prosecutor Linda Dunikoski said during her closing statements on Monday. “Not because he was a threat to them, but because he wouldn’t stop and talk to them.”

The prosecution’s “position is all three of these defendants made assumptions,” she continued. The three men “made assumptions about what was going on that day and they made their decision to attack Ahmaud Arbery (while they were) in their driveway because he was a black man running down the street,” Dunikoski said.

And later, Dunikoski asserted that the three defendants had no legal right to pursue Arbery.

“Greg McMichael assumed the worst,” the prosecutor told the jury, adding that statements made by McMichael later to police indicated that he didn’t know for certain whether Arbery broke into a home under construction that day.

Before the trial commenced, Judge Timothy Walmsley ruled that Arbery’s criminal record can’t be cited as evidence by the defense. Defense lawyers in September had asked the judge to allow the jury to know about Arbery’s two prior arrests, including one for shoplifting, and interactions with law enforcement